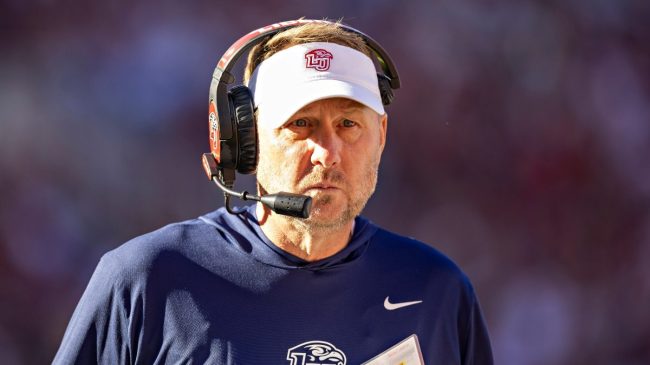 The Auburn Tigers have been in the rumor mill for a hot minute as they’ve been searching for a new head coach. Well, they finally found one in Hugh Freeze amid rumors swirling around Lane Kiffin. Now, college football fans are torching the Tigers for their hiring decision.

According to Bruce Feldman, Hugh Freeze is coming back to the SEC after agreeing to become the new head coach at Auburn. He spent a year at Arkansas state before going to Ole Miss in 2012. He’s had some off-the-field issues throughout his career, but the Tigers seem thrilled with the hire.

BREAKING: Liberty coach Hugh Freeze is coming back to the SEC, per source. Auburn is hiring him as its new head coach. @RossDellenger first reported the move.

As for Auburn fans and everyone alike, they can’t help but roast the program.

When you have a chance to hire a guy who just got beat in three straight by UConn, Va. Tech and New Mexico St. you just don’t pass it up

I assure you I’m not happy with his fake Joel Osteen ass. I thought AU was gonna hire a winner this time not a Gus wanna be. Pathetic … we will be right back here in a year or two! Keep the receipts!

Well, if this isn’t the best roast of the day then I don’t know what is.

Auburn went from a Cadillac to an Escort.

At the end of the day, Auburn made a decision and they’re going to have to see it play out. Additionally, it’s not like Freeze has a great track record. The fanbase is clearly disappointed, especially when a more promising coach like Lane Kiffin was connected through the rumor mill.