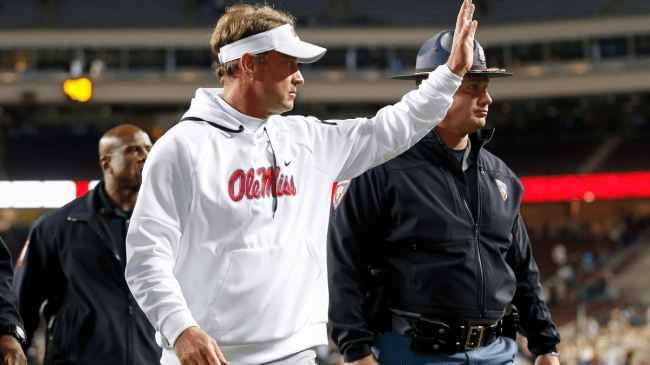 Auburn opted to fire Gus Malzahn in 2019 despite his leading the team to a national title appearance in 2013. The head coach took the Tigers to eight straight bowl games and was one of the few people to consistently compete with Nick Saban’s Tide on the field (3-5 overall record).

The program let Malzahn go, opting to replace the long-time coach with Bryan Harsin. A season and a half later, the Tigers are coach-less once again.

Auburn fired Harsin after a pair of uninspiring seasons on the Plains.

Former running back Carnell “Cadillac” Williams has taken over in the interim, but Tigers supporters are hoping to make a splash with the next hire. And they’ve set their sights on the leader of an SEC West rival.

Lane Kiffin is the top target, though it’s not known if he’d leave Oxford for what many consider a lateral move. That hasn’t stopped fans from trying to speak his hiring into existence.

Message boards are the top spot for inside information regarding your favorite team, particularly in times of transition. Of course, with every self-claimed “insider” comes unsubstantiated rumors and he said, she said claims. Just throwing something against the wall and seeing if it sticks.

Coaching changes spark the flame and that’s been no different at Auburn.

Fans behind the keyboard are running with the latest Lane Kiffin rumors, hoping that continuing to talk about them will make them come true.

You can all believe what you want, but as for me and my house, we will believe in FatTom22.

Some are going as far as to say that there’s been an offer made, and that Kiffin has accepted. He’s rumored to have met with his Ole Miss players to inform them of his imminent departure. But again, these unsubstantiated claims hold little weight.

Well-informed sources have also confirmed to MBG that Lane Kiffin met with the #OleMiss team yesterday to inform them of his decision to take the #Auburn job. pic.twitter.com/n89Cs7KcLm

And as is the case in all of these coaching change situations, flight tracking season is in full swing.

Auburn may have a shot at Kiffin, but there are a few other names on the board if they miss.

Kiffin has his Ole Miss Rebels sitting at 8-2, and had he been able to take down Alabama last weekend, he would’ve had a shot at leading OM to its first SEC Championship Game.

Unfortunately, the Rebs fell just short in a 30-24 defeat. Many are saying that the loss broke Kiffin, making him realize that his ceiling in Oxford has been reached. Auburn could offer an opportunity to get back on top of college football with the resources and history the program can offer.

24/7 Sports insider Brandon Marcello shared his thoughts on the potential of Kiffin landing at Auburn while speaking on the Crain and Co. podcast.

He is the No. 1 guy… [Auburn] is looking for a guy that’s going to make a huge splash, and that will come in and obviously get help in the transfer portal because there have been so many big changes there at Auburn.

Lane Kiffin has this pattern at Ole Miss of almost throwing his own program under the bus and he doesn’t even realize it. Talking about being upset with attendance at an 11am game going into a top 10 matchup. He’s complaining about NIL money and how others are outspending them. He’s talking about losing his defensive coordinator DJ Durkin to an SEC West rival at Texas A&M saying that they got outbid.

I think if he were to look in the mirror, he’d realize he’s probably hit the ceiling there at Ole Miss.

Others in that national media are echoing those sentiments, meaning these message board rumors may just have some steam behind them.

Something is happening in Auburn…..

Should Kiffin opt to leave, it would create a massive shakeup in the SEC West. With the portal, he’d likely be able to lure some players with him to the Plains. He’d also leave Ole Miss searching for a replacement after tallying an 18-5 record over the last 23 games.

As for Auburn, they’d again become an SEC Championship contender with fans once again believing they can compete with Nick Saban and Co.

If the Tigers miss on Kiffin, though, they’ll likely look to options like interim coach Cadillac Williams, who’s now 1-1 after taking over for Harsin, or Deion Sanders.