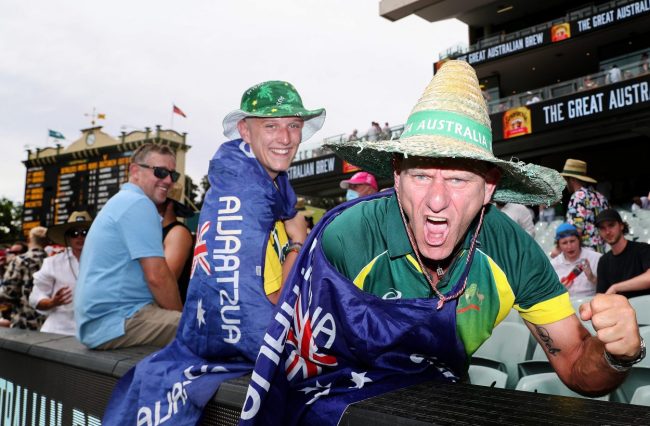 Very few people are better at crushing beers than Australians. That was certainly the case over the weekend as this cricket fan down under put on a show.

During Saturday’s cricket match at the Adelaide Oval in South Australia, a spectator was walking back to his seat with four beers. The man was appropriately decked out in green wig, a yellow shirt, camo cargo shorts and sandals. He looked the part.

When he passed by “The Hill,” he turned it up a notch. “The Hill” at the Oval is famous for its rowdy supporters, much like the Raiders’ Black Hole, or the Browns’ Dawg Pound.

One of the things that the fans on The Hill do, is encourage passersby to chug their drinks. The man in camo shorts was one of them and he obliged.

At first, he teased the crowd and made it seem like he wasn’t going to partake after finishing two of his four beers. And then he put on a masterclass, demolishing his third beer in just a few gulps.

But the rowdy Aussie fans weren’t done there.

They egged him on as he walked away, causing him to backtrack to The Hill. After a short pause to rile them up, the man in the camo shorts tossed his sunglasses aside and put back his final brewski.

Australia dominating on and off the pitch (video courtesy the 28 year old male). #Ashes pic.twitter.com/xZX6XwVHO8

Everything about the man’s performance was remarkable.

The theatrics, the chugging, the reaction when he finished his fourth beer— it’s perfect. Here are some different angles of the legendary chugs:

Another angle of this chap. #Ashes pic.twitter.com/5ddSlPDdKi

We have found the real 🐐 of Australian Cricket (video courtesy of Forgotten Stars). #Ashes pic.twitter.com/rnGPrlzYij