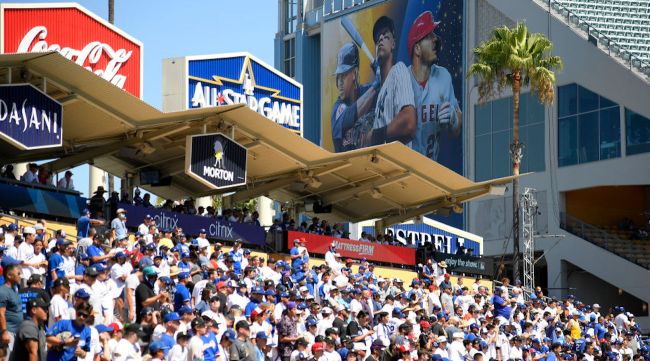 If you’ve ever been referred to as a “BLANK Adult”, then buddy, do I have some bad news for ya… it ain’t a compliment.

Whether you’re a LEGO Adult, Star Wars Adult, Disneyworld Adult, or perhaps the worst of them all, an Autograph Adult, the implication is that you’re a grown-up person whose into a specific hobby that’s largely meant for children, and that is, to put it bluntly, less than ideal. And this is coming from a guy who has made a career out of writing about Marvel movies and Batman.

Case in point? This Autography Adult — decked out in both a hat and a jersey, which we refer to in the soccer world as being a “full kit wanker” — attending the 2022 MLB All-Star Game in Los Angeles, who was caught on camera in crysal clear 4K jousting for position with a teenager about 30-40 years his junior in what has to be one of the saddest videos to hit the internet in 2022.

This is what the “where’s my hug” guys from high school turned into https://t.co/PUvf9001UN

Absolute trash behavior. Grow up, man, and get your elbow out of that kid's face. https://t.co/5k4kfmiPX4

This is weird not another level https://t.co/ykCSGeqQXh

What an absolute loser. https://t.co/JsWuNPPGGm

Lmao what a dork https://t.co/4Hqf0sNwho

“alright Joe, I want you to push those kids out of the way and try and get an autograph” https://t.co/WrJdhYB4AS pic.twitter.com/hJxhcsThqg

For his sake, I hope he’s desperately trying to get it signed for his child…but still. Don’t be a #TwatWaffle. https://t.co/yJdA3X8L7S

Another L for the Padres https://t.co/LLogf7i3BF

The kids should’ve jumped him https://t.co/ZZuOS69STZ

Imagine being this guy’s wife and seeing this video go viral. Or, perhaps even worse, this guy’s son, who would likely be a similar age to this Dodgers-shirt-wearing teen, if not a bit older.