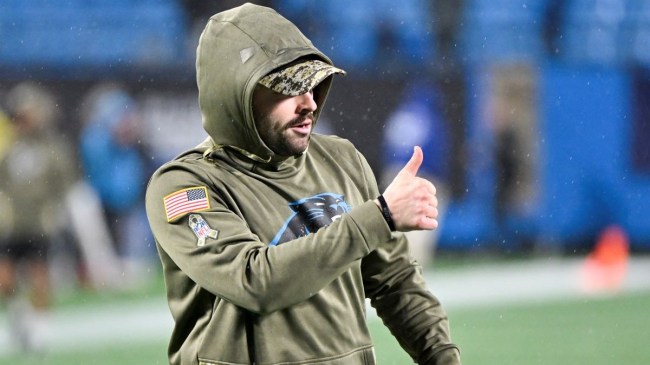 Baker Mayfield’s NFL career has been one long, steep slide from Heisman Trophy winner and first overall pick to potential career backup or maybe even out of the league.

Mayfield burst onto the scene in college first with the Texas Tech Red Raiders and then with the Oklahoma Sooners. He wrapped up his remarkable college career with a Heisman Trophy in 2017. He became the first and still only player to go from walk-on to Heisman winner.

That success continued when the Cleveland Browns made him the first overall pick in the 2018 NFL Draft. Mayfield’s rookie season was an unbridled success. He threw for 3,725 yards, 27 touchdowns and 14 interceptions to lead Cleveland to a 7-8-1 record. But his career has been up and down ever since.

He left Cleveland in the offseason after a trade to the Carolina Panthers. But the move has been an abject disaster for both sides. Mayfield went 1-4 in his five starts. He’s completed a career-low 56.6 percent of his passes for just 1,117 yards and six touchdowns to go along with four interceptions. Mayfield’s play cost Panthers coach Matt Rhule his job and led Carolina to trade both running back Christian McCaffrey and wide receiver Robbie Anderson.

To make matters worse, Mayfield has been dealing with a high ankle sprain and seemed to get Wally Pipp’d by backup QB PJ Walker. But now he may have been thrown a lifeline.

Walker started each of the last four games for the Panthers, even after Mayfield’s return from injury. But now he’s suffered a high ankle sprain of his own and Carolina will once again turn to Mayfield against the Baltimore Ravens in Week 11. Walker suffered the injury in Carolina’s 25-15 victory over the Atalanta Falcons last Thursday night.

But interim head coach Steve Wilks said the QB “sucked it up and played through it.”

Now it appears Mayfield will have another, perhaps final, chance to impress and save his career as a starting quarterback in the NFL.

Might b bakers last chance to prove he can still b a starter in this league. Not likely to happen but he gets a shot 😂 https://t.co/UkkhnCFdhC

Do you get the feeling that is might be Baker Mayfield last start in the NFL? The Panthers are not my team and I haven't seen much of their play this season but I do understand the business of pro football. Baker is making starter money and he's not a starter.

If this is Mayfield’s final chance, it comes at an opportune time. The Ravens have allowed 2,329 passing yards this season. That ranks 25th in the league.

It may be put up or shut up time for one of the league’s most polarizing players.