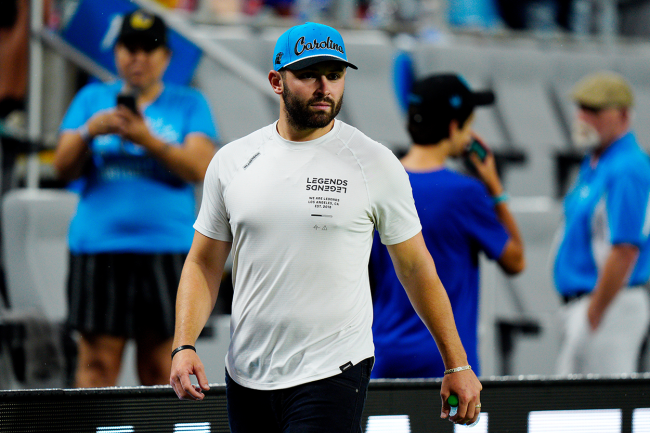 Baker Mayfield has had an interesting six months. After failing to lead the Browns to the playoffs while dealing with a shoulder injury in 2021, the former No. 1 overall draft pick assumed that he would be returning to Cleveland for the final year of his contract in 2022.

And then the organization traded for Deshaun Watson and left Mayfield disgruntled. He heard the message from the Browns loud and clear and wanted out.

There was a lot of back-and-forth about where he could potentially end up, how much money would be paid by what teams, and whether he was worth trading for. In the end, Mayfield was traded to Carolina.

Now that he is on the Panthers, the former Heisman trophy-winner will compete with Sam Darnold for the starting job. It’s not guaranteed for either guy and whomever emerges as QB1 for Week 1 in September will have to earn the opportunity.

The competition got underway this week as Carolina opened training camp. And as Mayfield made his way onto the field on Wednesday, things got a little bit testy.

Both potential starting quarterbacks, Darnold and Mayfield, walked out of the locker room and onto the field together. As they did, a group of fans started shouting at the first-year Panthers signal-caller to try and grab his attention.

“BAKER LOOK,” you can hear one fan yell.

Well, Mayfield looked, but he didn’t like what he saw. One of the fans shouting his name was holding his jersey from his time with Cleveland.

Mayfield turned in the fans’ direction and gave them a wave before addressing the Browns jersey holder directly.

“Put that Jersey away,” said Mayfield, before cracking a smirk and getting on with his day.

Baker and Darnold head to the field together.

Side Note: he wasn’t a fan of the guy hold up his Cleveland jersey. pic.twitter.com/s5krMYHrcR

Clearly, Mayfield is done with the Browns. That chapter of his book is closed and he wants to move on entirely. Savage.