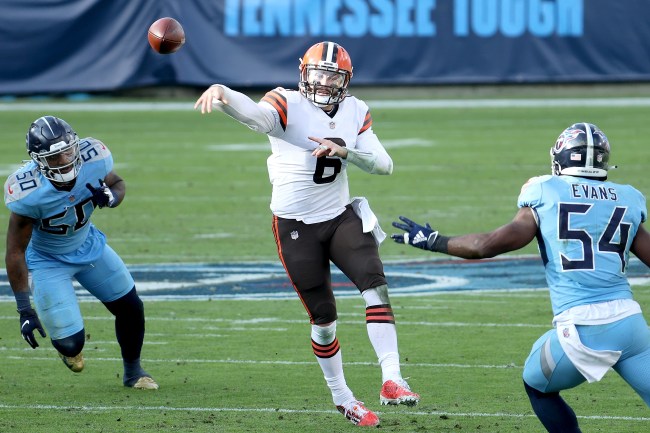 Baker Mayfield had arguably the best game of his career against the Titans and his wife couldn’t wait to rub it in Stephen A Smith’s face.

Earlier in the week, the ESPN host blasted Mayfield on First Take.

There's no quarterback who has done LESS with MORE than @BakerMayfield. I still respect him, but he’s got to do more if the @Browns are going anywhere. pic.twitter.com/PIpmfQrAJh

On Sunday, Mayfield threw four touchdowns and scored a team-record 38 points in the team’s win vs the Titans.

Baker Mayfield had 4 Pass TD in the 1st half at the Titans, the 2nd time this season he's recorded 4 Pass TD in a half (Week 7 at CIN, 2nd half). No one else in the NFL has had a half with 4 Pass TD this season.

The Browns' 38 points are their most in a half in franchise history pic.twitter.com/xzDQeiKR5Q

In The Biggest Game Of Baker Mayfield's Career?

Immediately after the game, Baker’s wife Emma immediately troll Stephen A. over his rant.

Stephen A seemed to back off his criticism of Mayfield after the QB’s big game.

Okay y’all. @bakermayfield is balling right now. 3 TD’s and 186 yards passing and it’s still the first half. He’s doing it right now. Gotta give credit where it’s due