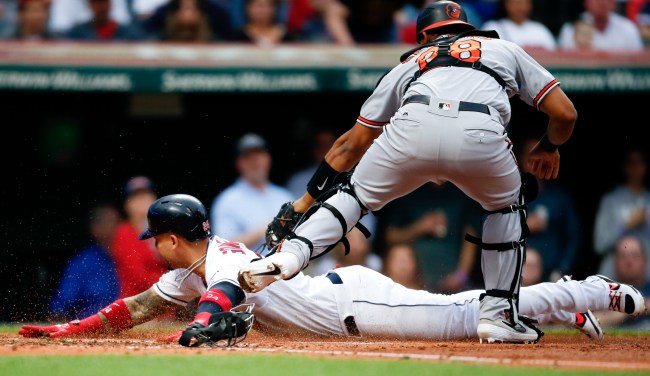 The Baltimore Orioles lost to the Cleveland Indians on Thursday (7-to-14) despite leading in the 5th inning. Cleveland went on to put up 8 runs in the 6th inning or later thanks to a 6-RBI, 2-HR game from Kipnis.

In the bottom of the 7th inning, with one out and the bases loaded, the Baltimore Orioles infield managed to pull off one of the absolute worst plays in the history of baseball. I’m seriously at a loss for how professional baseball players let this happen because if this happened at the H.S. level those players would be running laps around the outfield for hours.

Instead of tagging the runner directly in front of the second baseman playing the shift they let the runner advance, they then fuck up the throw to first, and then miss the play at home and allow all runners to advance (two scored!!!) on what should’ve EASILY been a 2-out play. HOW DID THIS HAPPEN?? The guy on 3rd already scored but they somehow recorded ZERO outs and allowed the runner to score from second?!

Here’s the clip on Twitter and YouTube so you can choose your preferred medium to watch. I’ve set the YouTube video to start at 4:59 just before the play happens but if your video doesn’t start at that point just skip ahead to that time stamp.

A colleague of mine is a Little League coach and I could see him flipping his absolute shit on the field if the kids butt fumbled a bases-loaded routine play like this but somehow it happened at the major league level?!? I know the Baltimore Orioles have fallen on hard times as a team (in terms of wins) but I didn’t realize it was this bad.

It’s only mid-May but the Baltimore Orioles are already 13-games back in the AL East (14-29) and have a .326 win percentage so far on the season so I guess we shouldn’t really be shocked by this but I am, I really am.