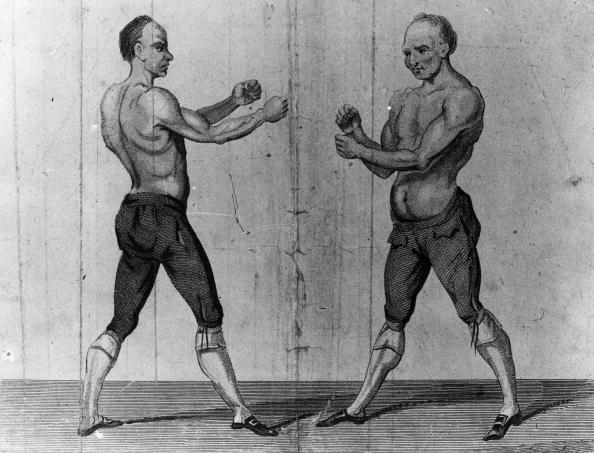 The first major bare-knuckle fighting event in the U.S. in 129 years went down on Saturday night and it was really something to behold. The state-sanctioned Bare Knuckle Fighting Championship happened in Cheyenne, Wyoming in front of 2,000 fans at a hockey rink. By the end of the 10 bouts, there were many fighters who had their knuckles and faces bloodied.

The pay-per-view event featured including four heavyweight fights in a tournament format at the Cheyenne Ice and Events Center after 28 other states passed. There were several MMA fighters on display at the bare-knuckle bout including Ricco Rodriguez, Joey Beltran, Tony Lopez, and Bec Rawlings, who is a UFC flyweight competitor. The 29-year-old from Brisbane, Australia defeated Alma Garcia with a TKO in the second round in the only bout of the night featuring two women.

“It felt the same to get punched as in an MMA fight, which is what my background is,” Rawlings said. “The difference was my knuckles more — when I punched her, I felt it a little bit more. Other than that, it was really nice just to let go and showcase my boxing skill and not worry about a takedown or a kick. It felt like the rawest form of combat sports to just go out there and throw your hands and let loose.”

“I never dreamed that it would be legal to be able to do this,” said bare-knuckle brawler Sam Shewmaker. “I’ve been in plenty of illegal bare-knuckle fights. I mean, growing up where I did, in the area I did, it’s kinda rough, but people are gentlemen about it too. You can fight, you get up, you’re done, you shake hands, and you go get a beer.”

“The knuckles was nothing,” said heavyweight fighter Tony Lopez. “… I’ve always wanted to fight with no gloves. Got a chance to do it here.” Lopez defeated Joey Beltran in a brutal five-round slugfest that left both men bruised and bloody. Ex-UFC fighter D.J. Linderman had his face bashed to a bloody pulp by 32-year-old MMA heavyweight Arnold Adams. Heavyweight Bobby Gunn knocked out Irineu Beato Costa Jr. in blazing 41 seconds.

The last major bare-knuckle event took place on July 8, 1889, when it took John L. Sullivan a preposterous 75 rounds to beat Jake Kilrain. Here are some of the bloody and brutal photos from the Bare Knuckle Fighting Championship, but be warned that some of the images are graphic.

Your @bkbchampionship Queen has arrived 💁🏼‍♀️🤜🏻💥 hope you enjoyed the fights, this is just the beginning 😆 ps my hands are just swollen #bareknuckleboxing #bareknucklefightingchampionship #bareknuckle #boxing #rowdybec pic.twitter.com/XXMgxg4jqK

Here are @rowdybec's hands after tonight's win in a bare-knuckle fight … pic.twitter.com/qgm8DkEW2s