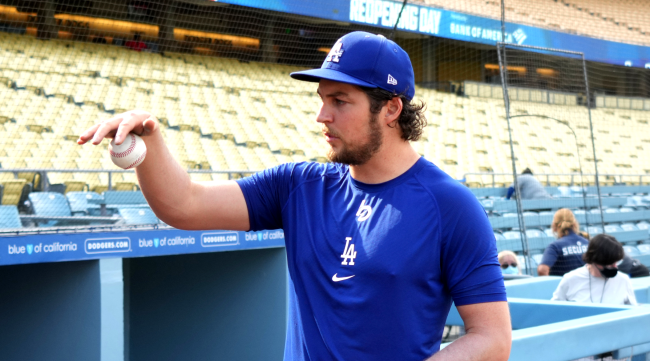 On Tuesday, Major League Baseball issued a press release announcing that it would begin cracking down on pitchers using illegal sticky substances.

Beginning Monday, MLB will be ejecting pitchers from the game if they are found to possess or apply a foreign substance and be automatically suspended for 10 games, with pay.

“After an extensive process of repeated warnings without effect, gathering information from current and former players and others across the sport, two months of comprehensive data collection, listening to our fans and thoughtful deliberation, I have determined that new enforcement of foreign substances is needed to level the playing field,” said MLB commissioner Rob Manfred in a statement. “I understand there’s a history of foreign substances being used on the ball, but what we are seeing today is objectively far different, with much tackier substances being used more frequently than ever before. It has become clear that the use of foreign substance has generally morphed from trying to get a better grip on the ball into something else — an unfair competitive advantage that is creating a lack of action and an uneven playing field.”

Numerous pitchers were unhappy with this change, but not necessarily for the reasons one might expect.

Trevor Bauer, of course, had opinions about this news and expressed them both on social media as well as during an interview on SportsNet.

Substances and nothing else. Should I be suspended for 10 games if I were to use this in a game?

“Umpires are the big winners here,” Bauer tweeted. “@mlb just made them judge jury and executioner. If the umpire dislikes a player or a team, even if a pitcher has literally nothing on his hand, oops, sorry. 10 games. And there’s no way for a player to appeal. How do you argue that your hand wasn’t sticky an hour ago or a day ago or a week ago? Memo to all umpires, I’m sorry for any of my past transgressions. Please forgive me.”

Bauer continued, “While we’re at it, @mlb please tell us how umpires who have never been trained to know what a ‘sticky’ substance is or isn’t are supposed to automatically enforce that uniformly? What is the standard for what is “sticky” and what’s not? Might want to clarify that, ya know, for the ‘competitive integrity’ of the game. It would be really unfair to have one crew think sticky is one thing and another crew to think it’s another thing. Rules are supposed to be uniformly enforced right? Almost like you should’ve used an off season to define that.”

So a gray area being policed by non experts with pre existing responsibilities that outweigh being able to tell the difference between a bad batch of SPF 40 or a space aged bio concoction. Rules in place weren’t enforced sooo LETS MAKE SOME MORE UP & BE VAGUE ABOUT THE POLICING!

what are we doing

White Sox ace Carlos Rodon, who is sporting a career-low 1.89 ERA and threw a no-hitter this season, doesn’t understand how a pitcher will get suspended, but none of the Houston Astros players who cheated their way to two World Series, winning one, received no punishment.

"You're giving out 10-game suspensions for cheating, but you give the Astros no suspensions at all." pic.twitter.com/ZFAwU7H5cp

Perhaps the most important person in this discussion, however, is the Rays’ young star Tyler Glasnow who just went on the injured list after being diagnosed with a partially torn ulnar collateral ligament and a flexor tendon strain on Tuesday.

“I truly believe 100 percent that’s why I got hurt,” said Glasnow, Tricia Whitaker of Bally Sports Florida reported. “I’m frustrated MLB doesn’t understand. You can’t just tell us to use nothing. It’s crazy.

“I don’t want this to happen to anyone else. My life long dream is I wanna win a Cy young and be an All Star and now it’s just sh-t on. Now it’s over. Now I have to try to rehab to come back in the playoffs. I’m clearly frustrated. You can’t just tell us to use nothing. It’s crazy.”

Before his injury, the 27-year-old Glasnow was 5-2 with a 2.66 ERA and 123 strikeouts in 88 innings and was a big reason why Tampa Bay had the most wins in Major League Baseball thus far this season.

Tyler Glasnow said when all this came out there was chatter it could lead to more injuries. Two starts ago he stopped using anything which he claims for him was only sunscreen and rosin.

Glasnow: “In my mind that sounds dumb. That sounds like an excuse a player would use to make sure he could use sticky stuff. I threw to the Nats…I did well. I woke up the next day and I was sore in places I didn’t even know I had muscles in.”

“I’m choking the sh-t out of all my pitches.”

Glasnow went on to say what most MLB pitchers are thinking this week.

“Do it in the offseason. Give us a chance to adjust to it. But I just threw 80 innings, then you tell me I can’t use anything in the middle of the year. I have to change everything I’ve been doing the entire season. I’m telling you I truly believe that’s why I got hurt.”

He also said all of the team’s player reps agreed that banning all sticky substances was a bad idea.

“We had a union meeting, 36 reps were on there,” Glasnow said. “And it was like, ‘Does anyone have a problem with sunscreen and rosin?’ No. Not a single person said there was a problem with it. Hitters said go ahead and use it.”