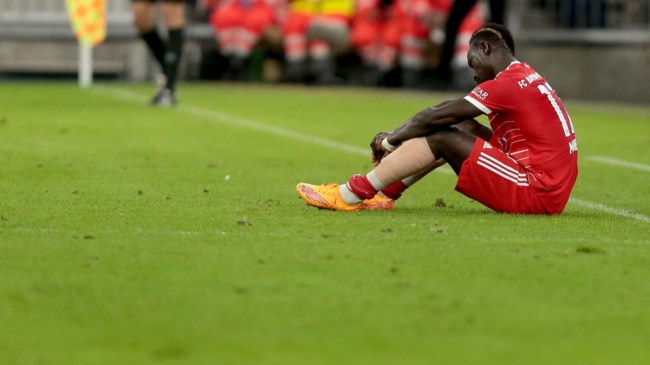 Among the many concerns fans had when it was announced that a World Cup would be played in Qatar in the middle of the club season, the potential for injuries to stars costing them the chance to play in the tournament stood out as the biggest issue.

With clubs having played as recently as this past weekend, players were not going to have a ton of recovery time ahead of the World Cup.

Unfortunately, that lack of recovery time has now proven costly for one star and his country.

BREAKING: Sadio Mané will miss the World Cup, Senegal confirms. He will not be able to be part of the squad as he’s not recovering from his injury. 🚨🇸🇳 #WorldCup2022 pic.twitter.com/RIn9ISBGi0

Sadio Mane suffered the injury that will cost him his World Cup while playing for Bayern Munich in a 6-1 win over Werder Bremen last Tuesday. With the game coming so close to the World Cup, he won’t have enough time to recover.

Senegal had recently said that they only believed he would miss the first couple of games of the group stage, but it seems his recovery won’t come as quickly as they had hoped.

This is pretty brutal news for Senegal. With Mane, Senegal was expected to at least compete with the Netherlands for 1st place in Group A and likely advance out of the group. Now they are barely favored to finish ahead of Ecuador.

Senegal still has some talent up front in Watford’s Ismaila Sarr, Salernitana’s Boulaye Dia, and Sheffield United’s Iliman Ndiaye, but they will badly miss having Mane’s creating and goal-scoring abilities.

They’ll have to hope the rest of their attack is enough for them to advance out of what has become a wide open Group A.