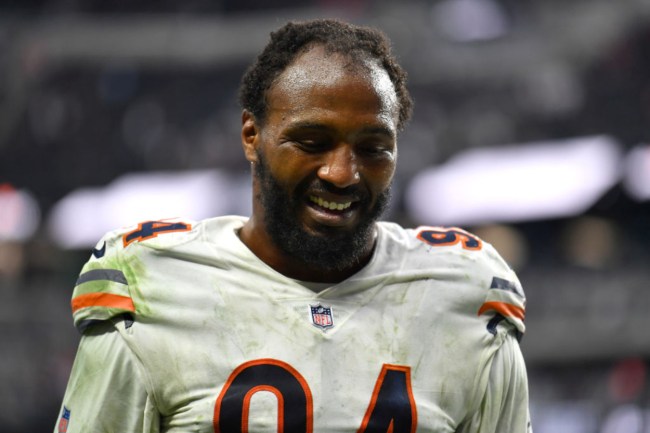 Chicago Bears defensive end Robert Quinn had quite the weekend. Not only did he help Chicago earn its second straight win with a 29-3 victory over the New York Giants, but he also broke Chicago’s franchise sack record.

The 31-year-old has been a bright spot on a bad Bears team this year with the second-most sacks in the NFL this season with 18. He’s also been able to force four fumbles this year as well.

While it’s been his ability to get to the quarterback making headlines throughout the year, he offered up quite a quote on Wednesday while discussing the media. Quinn has always been one to be genuine whenever possible when talking to media members.

“I’ve always been a quiet guy, that’s just my personality,” Quinn explained, according to Jason Lieser. “As far as when I have to talk to the media, they say a man has two things: his words and his nuts. And you don’t want to lose either. I try to be as honest as I can when I talk to people.”

Quinn was referencing the quote from ‘Scarface’ where Tony Montana says “all I have in this world is my balls and my word and I don’t break them for no one. Do you understand?”

Hey, the man isn’t wrong, if a man doesn’t have his words or his nuts, does he have anything at all?

Everyone seems to be enjoying Quinn’s quote about the media. The NFL world reacted accordingly to Quinn’s wise words:

Put this on my gravestone. https://t.co/fyixok09mx

No truer words have been spoken https://t.co/GezP7AjZqF

this moves him in to first in the dpoy convo https://t.co/uWMc36FeWp