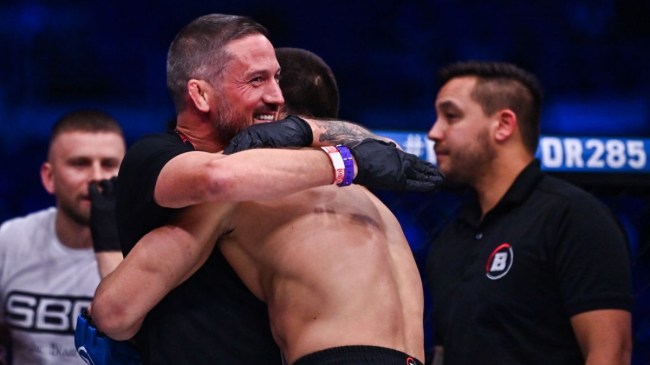 Bellator 285’s prelims got off to a wild start today.

The card opened with a welterweight fight between Dante Schiro and Luca Poclit. Both fighters were coming off of wins in their most recent outing and were looking to work their way up the rankings in Bellator.

While Poclit was able to get the fight to the ground, Schiro was able to reverse the fight a few times in the first couple of rounds and appeared to be heading for a 2-round lead on the scorecards late in the 2nd round as with Poclit mounted.

Then Poclit made his move to get out from the bottom and the fighters ended up in what appeared to be a 50/50 position. However, Poclit had managed to sneak his arm underneath the chin of Schiro.

After a little bit of work in this position, Poclit began to work his toward a better position when suddenly the ref stopped the fight. Poclit let go and Shiro collapsed to the canvas.

It turned out that Poclit had choked his opponent out with a move that had never been seen in a major MMA promotion and was deemed the “Lucanator” on the broadcast.

This fight was Poclit’s first in Bellator and if he keeps getting finishes like this he’ll quickly become a fighter to watch in the organization.