Ben Askren Had The Perfect Reaction To Getting Knocked Out In A UFC Record 5 Seconds, Remembers Nothing About The Fight 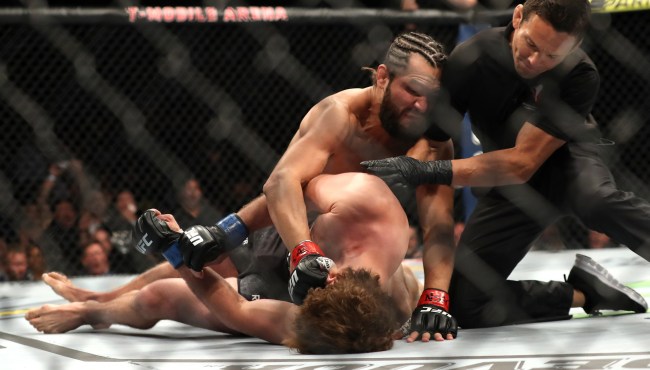 Ben Askren was knocked out by Jorge Masvidal at UFC 239 on Saturday night in a record five seconds, thanks to a devastating flying knee that turned his lights out just as the fight was getting started. Askren’s reaction to the shocking KO, once he woke up, was A+. He also remembers nothing whatsoever about the fight.

Askren entered the fight with Masvidal with an unblemished 19-0 record so the fight lasting just five seconds, with him on the losing end, was certainly an unexpected result.

Thankfully, Askren lived to fight another day and a few hours after being knocked out posted just about the best possible reaction to his Twitter account.

At the post fight press conference, UFC president Dana White confirmed that Askren was going to be okay, “He’s good. All of his stuff came back negative so he’s okay. I’m sure he’s not okay [with the loss] but he’s [good enough].”

On Monday, Askren appeared on ESPN and said he had zero memory of what happened.

Ben Askren: "I remember being in the cage with (Jorge Masvidal). I don't really remember the flying knee."@arielhelwani: "You don't remember anything in the cage?"

Askren tells @arielhelwani that he didn’t have any memory of what happened until the hospital: "I don't really remember the flying knee. And then when I can recall, I remember everything. I was like, 'Oh shit, I lost to Jorge Masvidal. This freakin' sucks.’” #HelwaniShow

"I don't like Jorge at all, but that was a damn good flying knee."@Benaskren gives credit to Masvidal for his technique pic.twitter.com/u1yRcJMerD

And for those who think Masvidal landing that devastating flying knee was a fluke, let me direct you to this video his coach Mike Brown released from just two days before the fight.

As for whether he felt bad after mocking Askren while he laid there out cold on the canvas… nah.

“There’s not too many people that I’ve disliked, I have over 50 pro fights, and he’s one of them,” Masvidal said at the post-fight presser, then added, “…it’s not over for Ben either. He still has to deal with me. If I see him at Whole Foods, I’m a still slap that dude up, ‘cause I don’t like him.”

😳 Jorge Masvidal needs to be stopped (via @arielhelwani) pic.twitter.com/SKgqDnDtRj