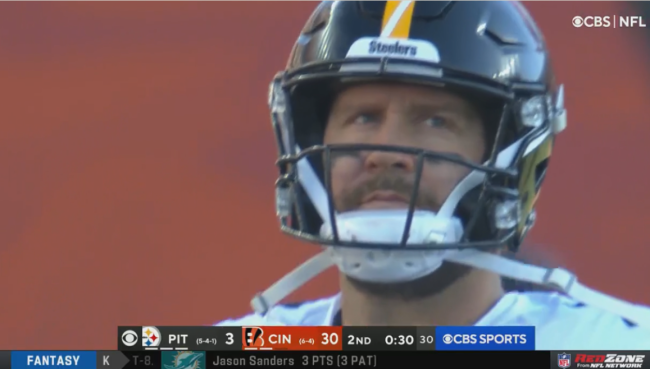 The Ben Roethlisberger era in Pittsburgh might be coming to an end in front of our eyes.

Earlier this year, Fox Sports’ Jay Glazer reported that Ben has control of his future, but he doesn’t believe the QB will be back after this season.

Via The Pat McAfee Show

“It’s kind of up to Ben, kind of like how it was with Drew Brees with the Saints, too. It’s like, ‘we’re not going to push him out.’ As long as he wants to go, he is just going to keep going,” “I think they were a little surprised he came back. But, no. If Ben wants to go, Ben is going to go. But, I don’t see him going back after this year.”

On Sunday, Roethlisberger threw a pair of terrible interceptions against the Bengals, making it seem like his playing days are coming to an end.

Here’s Ben getting picked off by Eli Apple. #Steelers pic.twitter.com/ERS2IT3Uaq

The Bengals ended up taking a commanding 31-3 lead at halftime, and fans started calling for Ben to retire.

Big Ben should just retire after this game.

Ben Roethlisberger is done. Should retire

Big Ben knows it's time to hang it up pic.twitter.com/nXGFC4mY1j