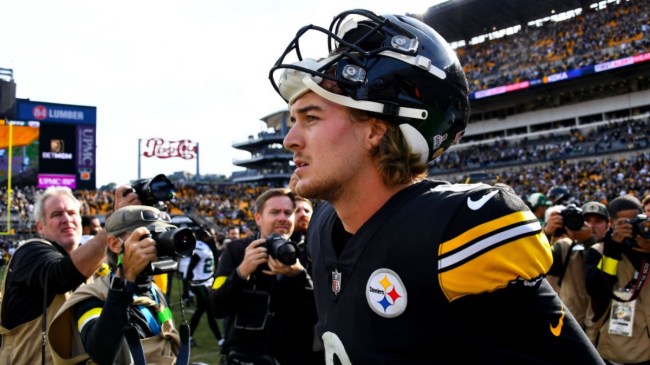 The NFL world was treated to a surprise debut this weekend. For the 1st 3 weeks of the season, the Pittsburgh Steelers stuck with Mitch Trubisky as their starting quarterback. That decision led them to a 1-2 record to start the season.

In Week 4, Trubisky’s struggles finally saw him get replaced. Trubisky and the Steelers’ offense once again struggled, but this time it was against a Jets defense that was allowing an average of 27 points per game to opponents.

At halftime, Trubisky had only managed 6 points and had already thrown an interception. With the Steelers trailing 10-6, Mike Tomlin decided to turn to Kenny Pickett.

After an interception of his own on his first career throw, Pickett began to turn things around for the Steelers. He led them on a pair of second half touchdown drives to take a 20-10 lead.

The Jets answered back with a TD of their own and then Pickett made a costly mistake. With 3:34 left in the game and the Steelers facing a 2nd and 15 from the Jets’ 36, Pickett threw an interception, setting up the Jets for one last drive.

The Jets capitalized and scored a touchdown to leave Pittsburgh with a 24-20 win.

Today, Ben Roethlisberger revealed that the rookie texted him about the costly error after the game.

Ben on Pickett: “I think he’s beating himself up a little bit on the last interception. Kenny texted me like, ‘I’ve gotta throw that one away.’ And I’m like, listen. You’re talking to the guy that rarely ever threw a ball away. So just go play with confidence.” #Steelers #NFL

The Steelers didn’t get the result they’d have been hoping for out of this game, but there were still plenty of positives to take away from Kenny Pickett’s debut.

The offense was much more productive with Pickett in the game and he even added a bit of a running threat at the position.

Despite the loss to the Jets, Steelers fans just have to be glad the coaching staff opted to give their offense some hope this weekend.