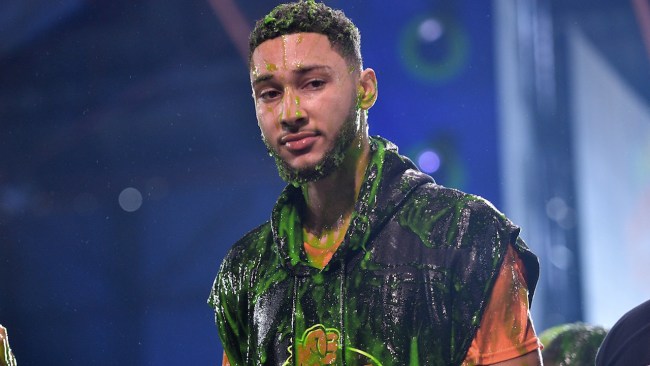 Do you remember where you were the first time you learned Ben Simmons really couldn’t shoot? You know what I mean — the moment you realized it was more than just a running Twitter joke and that the dude literally can’t hit a bucket further than 3-feet.

I do. It was the 2018 NBA Eastern Conference Semi-Finals and the Sixers were up in Boston for Game 2.

Not wanting to root for either team (as a New Yorker, rooting for a Philly or Boston team is sporting treason) but needing to find a way to succumb to my crippling gambling habit, I decided to dabble in a prop bet to get my fix.

What was the prop bet, you ask? Ben Simmons over, like, 15 or 16 points, which is really not all that much for a kid who was talked about in the same breathe as LeBron James before he was drafted.

Simmons ultimately finished with… one point on 0/4 shooting in 30 minutes of action, which is just offensively (in both senses) poor.

And since that day, I’ve told everyone who will listen — especially my Philly-born roommate — that Simmons is a fraud until he develops a jump shot. He was the number one pick in the draft, after all, he should be able to complete one of basketball’s most integral skills.

Well, it appears Simmons heard me (and the literal millions of other haters and losers on Twitter who make the same jokes that I do) and spent his offseason in the gym getting up jump shots.

Since Simmons’ lack of a legitimate jump shot has become a meme in and of itself in recent years, NBA Twitter predictably lost their mind upon seeing video of him hitting one (1) shot from beyond the arc.

29 NBA teams when Ben Simmons comes back with a jumper next season pic.twitter.com/9k1gzpOzC2

the Eastern Conference after Ben Simmons unleashes the full-scale weaponry oh my pic.twitter.com/a9EiJ7oKzb

Like to see him do this against more than the salesmen from his local Ford dealer.

Ben Simmons has a jumpshot. pic.twitter.com/3f1f9TlTb9

Given their decision to let Jimmy Butler go and sign Simmons to a max deal, the Philadelphia 76ers are clearly betting on Simmons to take that next step in his professional development and lead the team to the promised land.

While the Eastern Conference is certainly deeper than it’s been in recent years, it’s also as wide open as it’s been in about a decade, as both LeBron James and Kawhi Leonard now reside in the West.

If Simmons can actually start to hit a consistent J, the Sixers suddenly become legitimate contenders. But if not, he may forever remain an internet meme (who also plays professional basketball for tens of millions of dollars and slept with Kendall Jenner, which I suppose balances it all out).