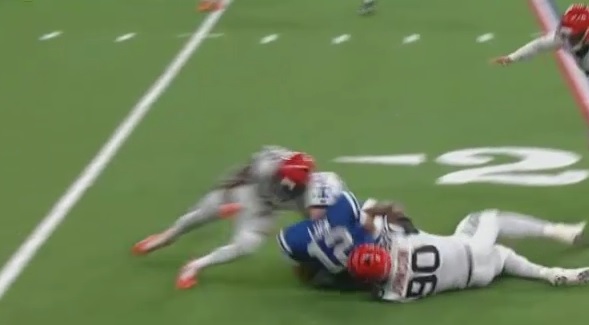 Well that didn’t take long. This offseason the NFL enacted several new rules to prevent head injuries and to make the game safer.

One of the new rules is similar to the college style targeting rule that allows for a referee to eject a player.

ARTICLE 8. USE OF THE HELMET. It is a foul if a player lowers his head to initiate and make contact with his helmet against an opponent.

Penalty: Loss of 15 yards. If the foul is by the defense, it is also an automatic first down. The player may be disqualified.

Today, Bengals safety Shawn Williams became the first player to be ejected by the NFL’s new targeting rule when he lowered his head and delivered a late hit on Colts QB Andrew Luck.

Andrew Luck hit HARD late after a scramble. He's up, but there are flags. A lot of them

Here’s a video of the play.

Shawn Williams with the first bonehead penalty of the season. Hey Coach Lewis, shouldn't you have cleaned this stuff up by now?#SameOldMarvin

Shawn Williams that was disgusting