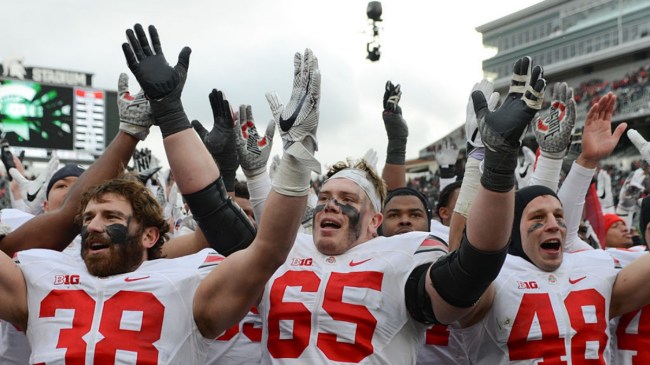 There are just a couple of days left until Selection Sunday in college football and this year there is one team that should be getting particularly nervous about their chances to make the College Football Playoff.

The top 4 teams in the Playoff rankings will all be playing in conference title games this weekend, but Ohio State finds themselves in 5th and watching from home after losing to Michigan last weekend.

Despite the fact that the Buckeyes won’t be playing in the Big 10 Championship Game, the conference’s commissioner believes they should have a spot in the Playoff.

Warren to AP continued:
"As you clearly evaluate who are the four best teams in college football, I think based upon how they performed throughout the entire season, Ohio State is one of those teams. … I think they have clearly shown what they can do."

It’s really difficult to see the “body of work” argument for Ohio State if USC and TCU win this weekend. If TCU finishes undefeated, they’re definitely getting in.

Then it would come down to a comparison between USC and Ohio State. Both teams have wins over Notre Dame. Ohio State has a strong win over Penn State. USC has top 20 wins over UCLA and Oregon State. If they win tonight, that adds a win over #11 Utah and avenges their only loss of the year.

It would also give them a conference title.

The Big 10 simply wasn’t strong enough this year to justify Ohio State getting a Playoff spot without even playing the conference title game and it’s somewhat surprising to see the conference’s commissioner make the argument for them over a team that will soon be joining the Big 10.