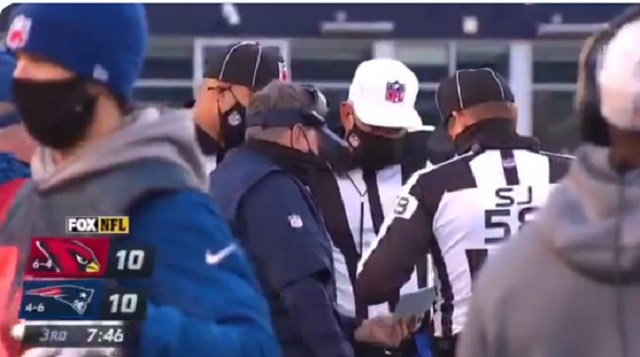 Patriots head coach Bill Belichick felt like he was robbed out of a TD by the refs, and he busted out the receipts to make his case.

On Sunday afternoon, Pats Gunner Olszewski returned a punt and took it all the way to the end zone but a “blindside block” penalty was called on his teammate Anfernee Jennings who delivered what looked to be a legal block on the play.

Somehow in the NFL rule book this is an illegal blindside block and a 15-yard penalty.

After the penalty, Belichick was seen surrounded by refs and he appeared to be showing them still photographs of the play while arguing the call.

Bill Belichick still letting the refs hear it about that Jennings block/penalty pic.twitter.com/pkDxnSTzw5

Thankfully the Patriots the call didn’t cost them the game as they went on to beat the Cardinals with a late game-winning field goal by Nick Folk.