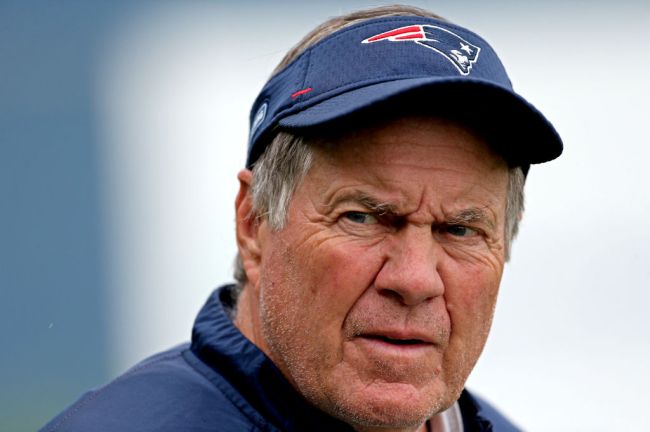 Football season is officially underway and Bill Belichick is already in full-form. The New England Patriots took the field for their first preseason game of 2021 on Thursday and beat the Washington Football Team 22-13.

While a win is a nice result to open the year, it is ultimately just an exhibition game that allows a coaching staff to evaluate some of its back-end roster players. Nobody really cares all that much about the result and Belichick shares that sentiment.

During Thursday night’s game, both Cam Newton and rookie Mac Jones spent time under center as New England tries to shake out its quarterback situation. Jones, the No. 15 overall pick, played five series and went 13-of-19 for 87 yards.

The Patriots recorded two field goals when Jones was in the game and he looked confident enough for his first-ever NFL appearance. His first drive, however, was nearly cut short too soon.

Jones dropped back and fired a bullet to Jakobi Meyers. It was a clear completion but the ball was ruled dead.

Here's another look at that "incompletion" to Jakobi Meyers (which was probably a catch). pic.twitter.com/ispmSOHij6

Had Belichick challenged the call, it would have been overturned and ruled a completion. He didn’t.

When asked why he chose not to throw the flag on the play, Belichick said he just didn’t feel like it. He doesn’t care enough.

Bill Belichick asked why he didn't challenge Jakobi Meyers' apparent reception which was ruled a completion.

In reality, Belichick probably wanted to give his quarterback some in-game experience with a 3rd-and-medium situation— that he converted. And he just didn’t feel like it.

Football is back and so is Belichick. PTL Amen.