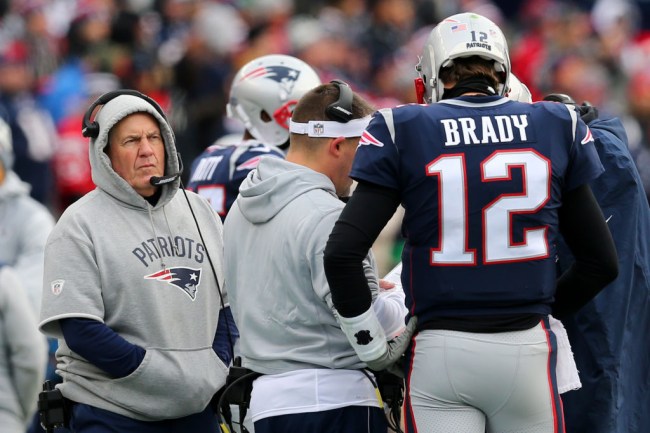 All week long all the media could talk about the hand injury Tom Brady suffered in practice. After today’s win in the AFC championship game, Bill Belichick was asked what he thought about Brady overcoming his midweek hand injury to beat the best defense in the NFL and the Pats head coach had a pretty amazing answer.

Reporter: Did you have to change your gameplan because of Brady’s hand?

Belichick: Not that I’m aware of.

Reporter: Can you speak to the resourcefulness of Tom dealing with something like that midweek and coming out and playing a huge game like that.

Belichick: Tom did a great job and he’s a tough guy and we all know that but we’re not talking about open heart surgery here.

Bill Belichick on Tom Brady: "He's a tough guy, we all know that. But we're not talking about open heart surgery here" pic.twitter.com/omGoydmIgy

This can’t be good for the Brady-Belichick relationship considering just a few weeks ago it was reported by ESPN that Brady was tired of Belichick not praising him after games.

For years, Brady stood as the perfect model for Belichick’s system, a future Hall of Famer who could withstand tough and biting coaching. Brady always knew the hits were coming during Monday morning film sessions — “The quarterback at Foxborough High could make that throw,” Belichick often would say after replaying a Brady misfire — but he could take it, secure not only in the knowledge of his singular impact on Belichick’s career but also in the theater of it all, that the coach was doing it in part to send a message that nobody was above criticism. “Tommy is fine with it,” his father, Tom Brady Sr., said years ago over dinner in San Mateo, California. “He’s the perfect foil for it.”

Brady is less fine with it this year. People close to him believe that it started after last year’s playoff win over the Houston Texans, in which Brady completed only 18 of 38 passes and threw two interceptions. Belichick lit into him in front of the entire team in a way nobody had ever seen, ripping Brady for carelessness with the ball. “This will get us beat,” he told the team after replaying a Brady interception. “We were lucky to get away with a win.”

At the same time, as his age has increased, Brady has become an advocate of positive thinking. Belichick’s negativity and cynicism have gotten old, Brady has told other Patriots players and staff. He feels he has accomplished enough that he shouldn’t have to endure so much grief. Patriots staffers have noticed that, this year more than ever, he seems to volley between unwavering confidence and driving insecurity. Brady has noted to staff a few times this year that, no matter how many game-changing throws he makes, Belichick hasn’t awarded him Patriot of the Week all year.