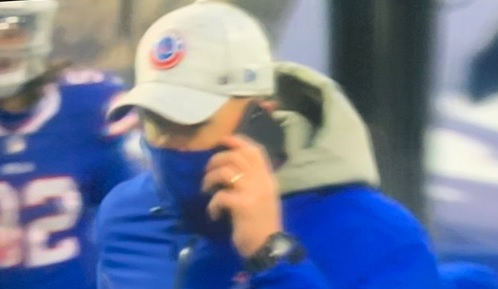 Before heading towards the locker rocker during halftime against the New England Patriots, CBS cameras caught Bills coach Sean McDermott using a cellphone, which led to many questions from NFL fans.

Was McDermott just on a cell phone?

Sean McDermott on a cell phone on running to the locker room at halftime? Don’t know if that’s a Covid interview thing or if there’s something personal going on but if this was Bill Belichick everyone would be screaming about a conspiracy pic.twitter.com/1ikPyGGkPH

Bills coach Sean McDermott on his cell phone walking off the field at halftime. Didn’t think that was legal. Wonder if it’s a family emergency or something pic.twitter.com/EoLmYv5x3W

What’s up with McDermott having a cell phone on the sideline?
#NEvsBUF pic.twitter.com/lK6ZIbLzBg

Update: According to Buffalo News McDermott was talking to CBS sideline reporter who was not allowed on the field due to COVID restrictions.

ecause of Covid-19 restrictions, the NFL has limited the number of people allowed on the sideline to as few as possible and is considering expanding the allowed bench area to keep players and coaches farther apart. Among those people no longer allowed are sideline reporters from the TV network.

McDermott spoke to CBS sideline reporter Evan Washburn on the phone as he headed inside, rather than speaking with him in person to minimize contact. He was scheduled to speak to Patriots coach Bill Belichick as well.

This has been the procedure throughout the season around the league, but it was the first time the scene has been caught on TV with McDermott.