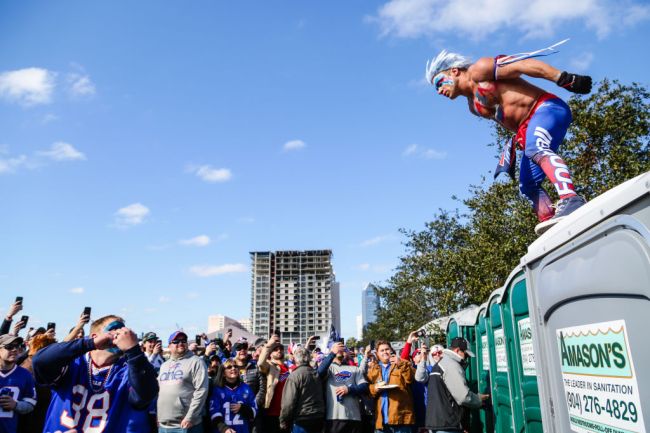 Bills Mafia saw an opportunity to take over South Beach and did exactly that. As the fall and winter weather starts to creep in up north, Buffalo faithful traveled to Florida in force for one last summer vacation— and to watch their beloved NFL franchise put a beatdown on the Dolphins.

After partying up and down Miami Beach into Sunday morning, Bills Mafia woke up bright and early to get over to Hard Rock Stadium. As is tradition, the tables came with them.

In an effort to take the table-smashing up a notch on the road, one tailgate congregated around a flaming table. This is not uncommon in New York, however, it is not the norm in Miami.

Nevertheless, with the fire roaring, one (willing?) volunteer was picked up by his two friends. The two (much larger) gentlemen proceeded to toss their friend directly onto the flaming table.

The intention was for the man who was thrown to break the table in half as the crowd went wild.

However, the table did not break and things got very awkward, and even more dangerous, in a matter of seconds.

The fan was very fortunate, because he very well could have been in dire need of a stop, drop and roll himself. Instead, anticlimactically, he quickly ran from the table and was seemingly unscathed.

On the field, Buffalo was also on fire. The Bills went up 21-0 and the Dolphins showed no signs of life.