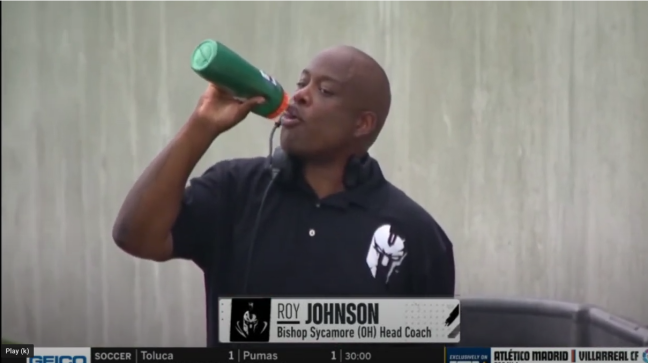 The Bishop Sycamore story keeps getting crazier by the day.

Last Friday, Bishop Sycamore was exposed for potentially being a fake school that lied to get on TV when ESPN announcers found many red flags when doing research about them.

Since then there have been accusations about the school recruiting overage junior college dropouts to play on the team.

Two players spoke with Complex about their experience playing for the team.

In the interview, the players spoke about the time coach Roy Johnson directed players on the team to beat up a homeless man for attempting to break into his car before practice.

Player 1: There was an incident where… Do you think I should speak on this?

Player 1: There was an incident where there was a homeless dude that tried to break into Roy’s car, that morning we were supposed to practice, and everyone came out and… there’s videos of this but I don’t want to release that because many players can get in trouble with the law… but they ended up jumping the homeless man and beating him.

Interviewer: Wait, so Roy authorized that?
Both: Yes

Player 1: Yea, they ganged up on him. I would’ve understood if he handled it himself but the players were beating on the homeless man. I wasn’t a part of it. The whole practice was cancelled because the homeless man got beat up.

Bishop Sycamore has reportedly fired Johnson amid all the controversy that has transpired in the past week.