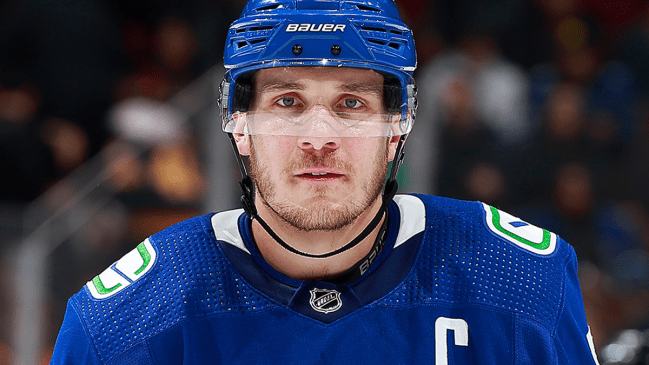 In 2005, the NHL opted to usher in a new era by eliminating the possibility of a game ending in a tie with the introduction of the best-of-three shootout that decides the winner of any regular season game that isn’t settled by the time the five-minute overtime period comes to an end.

The change wasn’t universally embraced by hockey fans, but it added another layer of intrigue by giving players the chance to highlight their individual talents in the one-on-one showdowns that have spawned some incredibly memorable goals, saves, and lengthy back-and-forth battles.

There have also been some games that had the potential to end with a bang only to wrap up with the ultimate whimper thanks to skaters who’ve fallen victim to some somewhat embarrassing brainfarts, including the one Brad Marchand committed against the Flyers in 2020.

Bo Horvat also needed a goal to keep the Canucks’ hopes alive against the Predators in their contest on Saturday night, and while the Vancouver captain wasn’t able to top the magnitude of Marchand’s error, he fell victim to a similar mistake after his fancy stickwork backfired to bring the game to a fairly underwhelming end.

That flub didn’t sit well with one fan who had some money riding on the Canucks—but Horvat did what he could to atone.

As sports betting becomes increasingly normalized (and, in turn, popular), there are plenty of people who’ve voiced concerns about new types of backlash players might face from fans who now have the chance to get emotionally and financially invested in the outcome of a game.

Now, I think most people would agree that heading over to an athlete’s Instagram profile to publically air your grievances is the textbook definition of A Bad Look. However, that didn’t stop one guy who said he lost $91.50 thanks to Horvat’s failure to capitalize from doing exactly that, and his decision to shoot his shot by complaining about the botched shot led to Horvat offering to pay him back.

Bo Horvat is a man of the people pic.twitter.com/LBLnM4JpmG

— Hockey Players With Animals (And Other Chaos) (@animalsofhockey) November 6, 2022

It would be perfectly valid to argue Horvat is setting an awful precedent by merely acknowledging the person in question (never mind offering to pay for the lost bet), but there are certainly worse ways to ensure you keep the fans on your side.