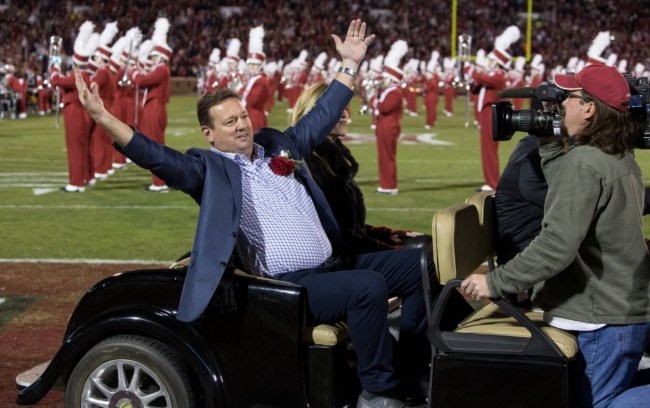 The college football season has been extremely strange due to the virus as it has forced teams to make on the fly changes throughout the year. The Oklahoma Sooners, who currently have a depleted coaching staff due to the virus, they’ve even called up a former head coach to come help them out at practices.

Yes, it’s true, Bob Stoops has come out of retirement so to speak to help out the Sooners as they prepare for Saturday’s game against Baylor. Stoops, who was the longest-tenured head coach in college football at the time, stepped down as head coach of the Sooners back in June of 2017, but current head coach Lincoln Riley somehow convinced him to get back out onto the practice field.

“Actually, we brought Coach Stoops out of retirement today,” Riley told reporters on Tuesday, according to CBS Sports. “He was on the field and coached with us today. It was great to have him out there.

It’s nice. It’s been kind of in our hip pocket this whole time. If we had any staff member that fell off, we’ve got a Hall of Famer sitting on the bench. That’s a pretty good bench when you can call that guy up.”

The Sooners had their game against West Virginia postponed last week due to ongoing virus-related issues and the team is still missing members of its coaching staff as they inch closer to their matchup against Baylor.

As Riley said, being able to call up Stoops for a helping hand at practice for at least a few days is a nice luxury. It’s a safe bet that there was a bit of extra juice out on the practice field on Tuesday.

Stoops, who recently turned 60, went 190-48 at Oklahoma and led the Sooners to a national championship in 200.