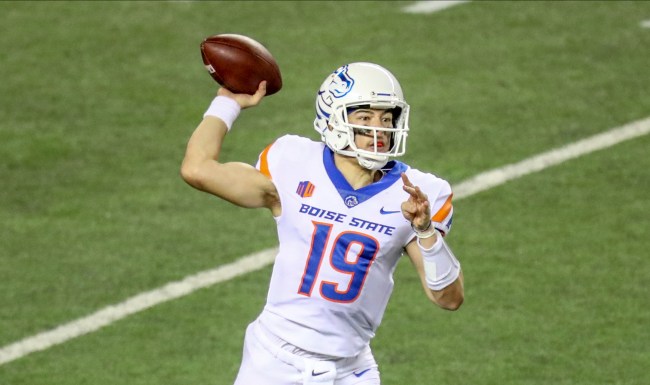 Boise State football is 4-1 this season with a single loss to No. 9 BYU, and Madonna and Metallica have been important contributors in each of the five weeks. Of course, we’re not talking about the musicians.

It’s hard to notice, but each one of the Broncos’ footballs has a name written in the white stripes.

When the team is ready for a new football, there is a process before they can get in the mix. A fresh ball must be washed and broken in, so the equipment staff member who does the work gets to choose the name.

“We probably sit there and think about it for like 10 minutes, ‘What should we name these balls?’”  Dustin Kelley, assistant director of athletic equipment told the Idaho Statesman. “It takes probably 20 minutes to scrub one ball, so you put some hours into it and it feels good when it’s actually in the game, like, ‘Oh cool, Dumbledore scored, I made that ball.’ ”

The tradition started about three years ago with the quarterbacks, who have specific preferences for how their footballs feel. Some like it more brushed out and others prefer it mostly as it comes out of the box, so having a way to identify which ball belongs to who is crucial. Instead of number labels, Boise State began with the names. Now, all of the position groups do the same. All of the receiving core balls are named after rappers like J. Cole.

The Broncos had its game against San José State postponed due to COVID-19 on Saturday and will complete its eight-game Mountain West Conference-only schedule with road games at UNLV and at Wyoming.