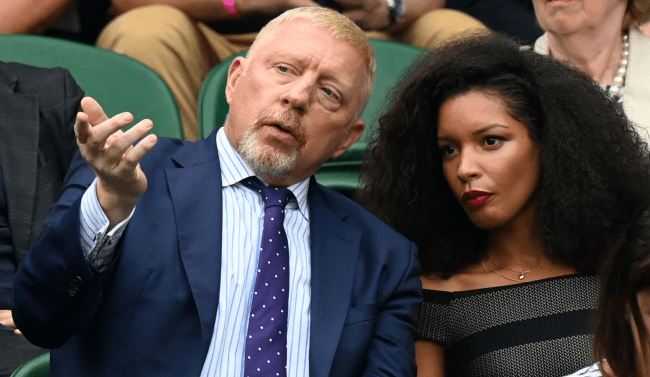 Former world number one tennis player and three-time Wimbledon champion Boris Becker has found himself in some hot water for something he said while calling a Wimbledon match this week for the BBC.

During the quarterfinals match between Novak Djokovic and Marton Fucsovics, Becker’s partner in the broadcast booth, John Inverdale, made a comment about Fucsovics’ fiancee’s name, Anett Böszörményi.

“If you’re a tennis player, it’s always good to have a partner called Anett,” said Inverdale. (If anyone knows why that would be something one would say, do please let me know.)

Becker, replying to Inverdale’s odd comment, replied, “They do say they have the most beautiful women in Hungary. I wouldn’t know that, but she’s certainly very pretty.”

Almost immediately, a bunch of people watching the match, or that heard about his comments later, went scorched earth on the 53-year-old six-time Grand Slam winner.

Stephanie Hillborne, the chief executive of Women in Sport, responded, “The charity Women in Sport has worked for decades to change sporting culture, including to end the objectification of women. When two men are comfortable talking about women in this way, never mind on live TV, it shows there is still more to do.”

Reactions to over Becker’s comments and the ensuing dust-up were all over the board.

“Disgraceful BBC using John Inverdale to comment on a #Wimbledon QF when the guy has no background in tennis doesn’t know the basics of the sport and debates the ‘attractiveness’ of Hungarian women & #Fucsovics‘ girlfriend with @TheBorisBecker#sexist#djokovic,” one person tweeted.

Unbelievable sexist drivel from Becker. Appalling and not relevant to analysis during a tennis match #Wimbledon #casualsexism

If Boris Becker had made an unpleasant remark like 'she has a face like a clog iron', now that would have been a cause for public censure.#NoHarmDoneIndeed #SnowflakeBritain

Is that really a crime? His joke about 'Annette' was pretty funny. Boris crossed the line. Why he is even on the BBC I do not know

I still don’t get the Anett joke. What am I missing there?

Tennis legend #BorisBecker in hot water for calling player's girlfriend "pretty" on #Wimbledon broadcast. Judge for yourself. So much for #journalistic #integrity Go figure. #wokenot of course she's #pretty. pic.twitter.com/12fYJhQHBA

The BBC responded to the kerfuffle over Becker and Anett Böszörményi’s attractiveness with a statement that read, “Boris Becker made a light-hearted comment that was not intended to cause offense.”