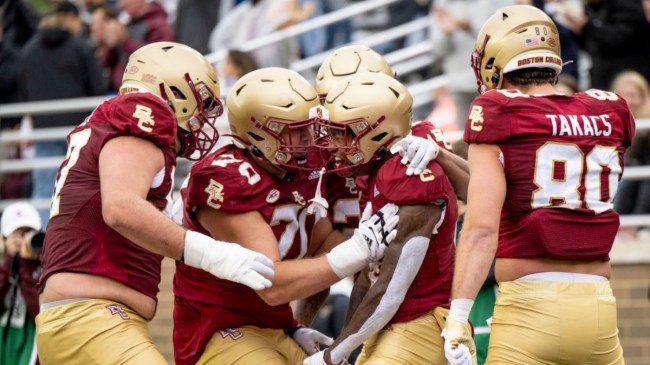 Despite having high hopes coming into the season, Boston College was expected to be an improved squad this year. However, things haven’t exactly panned out so far. They lost their season opener at home against Rutgers.

They followed that up with a loss at Virginia Tech before getting their first win of the year against Maine. Last week, they got crushed by Florida State.

Today, they took on a Louisville team who was 2-2 entering the day with the 2 wins coming against Central Florida and South Florida.

The game was a competitive one from start to finish, but in the end, a pair of 4th quarter field goals for Boston College delivered a 34-33 win for them.

Unfortunately for their fans, they were a little bit early with their celebration. The fans chose to storm the field with 1 second left on the clock, so the refs had to have them leave the field so Louisville could run one more play which, luckily for these fans, didn’t change the outcome.

This is wild. Apparently there is one second left on the clock. But the BC student section is already on the field.

Everyone has to return to their seats.

Why are they storming anyway? pic.twitter.com/DkXwBAkWoM

Aside from the premature celebration, the question that is really on everybody’s mind right now is why were they even storming the field in the first place?

Storming the field is supposed to be a celebration reserved when you pull off a major upset against a highly-ranked opponent. Thos was Louisville. They were 2-2 coming into this game.

I get that Boston College fans might not see a win actually worthy of a field storming this year, but there’s no need to force it.