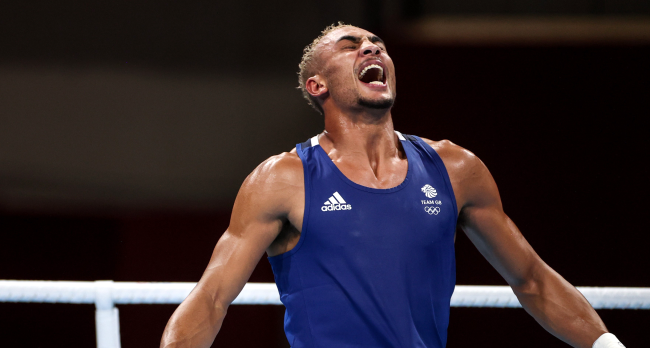 Instead, Whittaker stuck the medal in his pocket before being cajoled into showing it to photographers while the other medalists celebrated.

Ben Whittaker said sorry after a sulky display at the medal ceremony following his light-heavyweight final defeat at the #Olympics today.

The fighter cut a disgruntled figure, frowned for photographs and refused to wear his silver medal. https://t.co/uDafMddPoW

“Yeah, so, I didn’t win a gold,” Whittaker told MailOnline.com. “I lost a gold, so to me it’s a failure so I am not going to celebrate silver at the moment. I am sure over the years I will look back and see what an achievement it is.”

Whittaker added, “You don’t win silver…you lose gold. So that is why I was so emotional. Nobody trains for silver or bronze.

“Everybody up here trained for the gold medal. I woke up this morning truly believing this was my time. I had the whole of the West Midlands behind me and Great Britain.”

GB’s Ben Whittaker so devastated to finish with 🥈 that he just pockets the medal & chooses not to wear it.

“Come on Ben enjoy it, you’ll never get this moment back!” screams a coach watching in the stands.

He is crying. Totally devastated by his defeat to Arlen Lopez of 🇨🇺. pic.twitter.com/TnwvBP4RSs

Many fans watching Whittaker’s actions called him out for being a poor sport.

Lesson on how to be an Olympian:
UK boxer Ben Whittaker didn't win the gold he'd hoped for, refused to wear his silver medal and sulked on the podium.
UK heptathlete Katarina Johnson-Thompson suffered an Achilles injury, fell, got up, refused a wheelchair & hobbled to the finish. pic.twitter.com/PURAxXX9Nx

Disgusting behaviour at the medal ceremony. He doesn’t deserve to be part of the team. Spoiled, petulant, disgraceful.

Unfortunately disgraced himself at the medal ceremony. Hang that medal around your neck and be proud like the rest of #teamgb you've done great to get silver 🥈

Not a great look in the boxing men’s light heavyweight medal ceremony. Britain’s Ben Whittaker is so disappointed he refuses to put the silver medal around his neck and sticks it in his pocket instead. He then leaves the podium without acknowledging the others. #Tokyo2020 pic.twitter.com/r9c9ghMqlc

Not everyone took issue with Whittaker’s response to winning a silver medal, however.

'You don't win silver, you lose gold. I'm very disappointed - I feel like a failure. You're in this game to win gold.'
Love this - finally, an athlete at these Olympics prepared to tell the truth about competing in elite sport.
Good for you @BenGWhittaker. https://t.co/32RKabmDx5

Whittaker did later put the medal around his neck while speaking to the media and expressed some remorse for not doing so while on the podium.

“I was doing it for everybody at home and I felt like a failure,” he said, according to The Independent. “At the time, I should have put this beautiful silver medal round my neck and smiled because this is not just for me, it’s for the country.

“Even when I’m playing FIFA with my mates and I lose, I’m not talking to them for the next couple of hours – I’ve always been like that since I was a kid – so please accept that I wasn’t trying to be disrespectful to anyone.

“I wasn’t trying to take the shine away from Arlen’s moment but it hurt me so deep, and I felt so embarrassed. I will look back on it later and think ‘what was I doing?’ But I would like to thank everyone for getting behind me.”

He then added, “When I look back in a few years, it will probably feel like a great achievement, but I was so upset that I couldn’t enjoy it.”