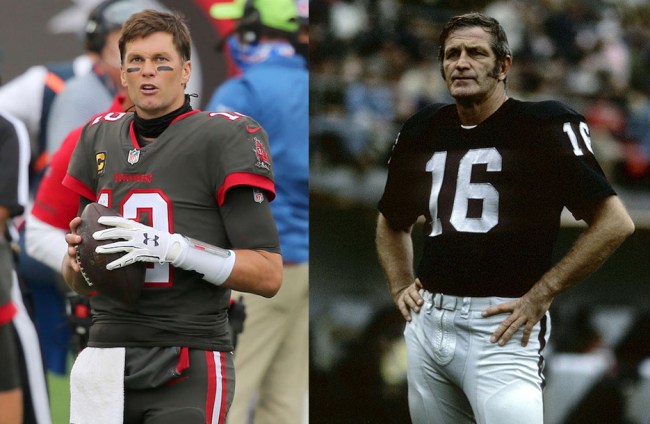 Brady broke Blanda’s “record” for the oldest quarterback to throw a pass in an NFL playoff game.

Maybe we should look into this TB12 diet pic.twitter.com/C0kRWzmT4A

Naturally, Twitter had jokes about Brady’s youthful look and Blanda looking as though he chewed on asbestos for fiber.

George loved rippin’ heaters on the walk from the car to the locker room. They don’t make ‘em like that anymore. pic.twitter.com/JzmBsAVFOT

Blanda pregame: “Which one of you mother fuckers smoked my last American Spirit?” pic.twitter.com/LIygLw6yXz

To be fair, in Blanda’s era, concussions were treated with unfiltered Marlboro’s, a hefty pull of Cutty Sark, and a good nap pic.twitter.com/dhWRmtMjnp

I think it is just that George was a male.

It’s really simple folks. George Blanda played when “kill the qb” was the actual game plan of NFL defenses. Tom Brady gets upset if his 7 seconds of surveying the field is interrupted. pic.twitter.com/68wS9YeLEL

Blanda played without a facemask when defenders were allowed to actually hit a QB. He also smoked, consumed cheap beer and ate barely cooked red meat, unlike the pussy food Brady eats!

George Blanda played til he was in his forties cuz he hated working at the mill. pic.twitter.com/DuqJhDHL8T

That picture is showing us the difference when men were men and today. Tom’s the goat but we all know that dude is pampered and eats avacado ice cream for Christmas sake.

Blanda was probably smoking six packs a day and didn’t spend millions on a healthy life every year. Put them in cage together…Blanda was maul him

Difference was that Blanda used the Botox in his knee pic.twitter.com/ZgfWFfeft3

Blanda lived to be 83. Brady will probably retire at that age.