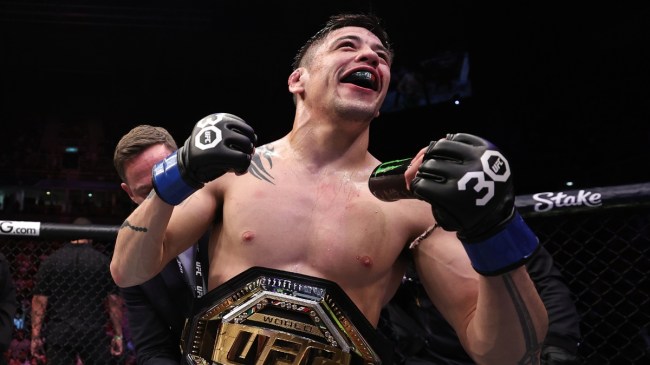 UFC 283 was filled with dramatics. However, things escalated quickly after Brandon Moreno defeated Deiveson Figueiredo in a controversial win.

Brazil fans began throwing food, beer bottles, and everything in between. Now, Moreno shares his reaction to the upset crowd.

During the postfight interview, the flyweight champion reflected on the crowd’s reaction after winning over Figueiredo. Brandon Moreno also talks about the punch he threw as he explains it was a clean punch that happened to land on an open eye.

Brandon Moreno talks about the reaction from the Brazilian crowd and says his punch did the damage to Deiveson Figueiredo’s eye at #UFC283 pic.twitter.com/YiWmDxuSoQ

In the replay, it appears to be a clean punch. Deiveson Figueiredo just happened to have his eye open or something when Moreno’s fist connected. Even so, the Brazil crowd wasn’t happy in the slightest.

They were so bad, that even Glover Texiera had to tell the crowd to be chill after he lost the light heavyweight title to Jamahal Hill.

Glover is a legend. After seeing the crowd throw food and drinks at Moreno, Glover gets on the mic to make sure the crowd does not do the same to Hill as he exits the octagon. He also stated that he would walk with Hill to the back to make sure nothing is thrown. pic.twitter.com/tKozSdWGMg

At the end of the day, Brandon Moreno is the champion of the flyweight division. For now, it’s unclear who he will fight next but there’s a strong chance we’ll see him in the octagon again later this year.