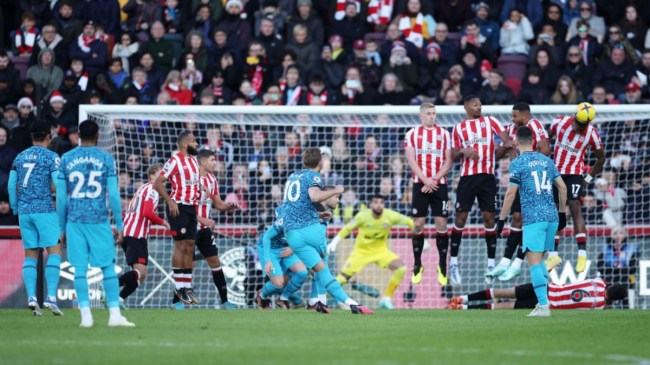 Heading into this year’s World Cup, England’s fans once again felt like this was the year they would have a chance to lift the trophy for the first time since 1966.

Unfortunately, those hopes were dashed in the quarterfinals in a match against France.

What was shocking was the way the match ended. England had a chance to equalize late and that chance went to their star striker. The team was awarded a penalty in the 81st minute and Harry Kane stepped up to take it. Kane had already converted one penalty and fans were expecting to see him equalize again.

His second penalty ended in disappointment as he failed to convert and England was eliminated.

The English Premier League returned to action this week for the first time since England’s World Cup exit and fans were ready to let Kane hear about that miss.

Kane and Tottenham took on Brentford in their first game back from the break and Brentford’s fans mercilessly trolled Kane by singing “you let your country down” during the match.

Unfortunately for Harry Kane, that penalty miss is a moment that will live on for some time in his home country.

Kane was a big reason that there were such high expectations for England this year, but fans will remember that he came up short in the biggest moment in this tournament.

He’ll get plenty of opportunities to bounce back in the Premier League in 2023, but he’ll have to wait until 2024 to make up for the miss for England in a major tournament.