Brett Favre Goes VERY In-Depth About His Opioid Addiction, Why He Quit, And Having Thoughts of Suicide 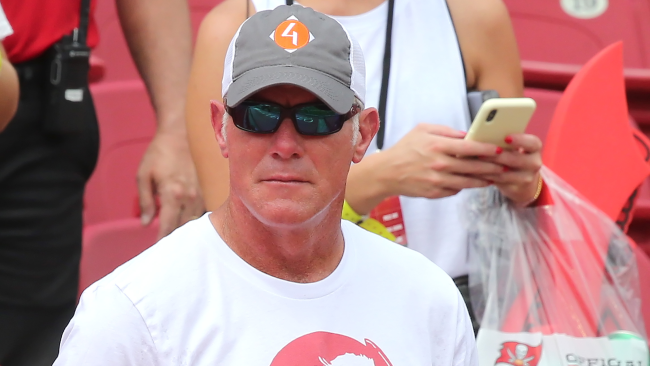 On the latest edition of Bolling With Favre with guest with Dr. Phil, Brett spoke for the first time about his about his struggles with addiction to opioids and alcohol, what made him quit, and having thoughts of suicide.

In the clip from the show below, Favre details how he quickly he became addicted to pain pills and how during his Super Bowl winning season, was taking up to eight pain pills a day with the peak of his addiction hitting 16 Vicodin a day.

He goes on to describe his detox and recovery, sharing that he even contemplated suicide during this difficult time in his life.

Co-host Eric Bolling got the conversation started by asking Favre, “What made you stop? I mean, so many of these people who have found themself addicted there’s an event, I would think, that comes to your mind that makes you stop?”

“So, 1994, was when it started,” Favre responded. “Now I had taken pain pills before that. Not necessarily football injuries. But when I first realized that I liked the pain pills was after that Philadelphia game in ’94. And it wasn’t… the next time I got injured, for example, it may have been three weeks later and I sprained my ankle. I don’t know if it was sprained enough to warrant getting pain pills, but I remembered the effect that it had. And I liked it. And I thought, ‘What the heck? Why not?'”

Favre goes on to say that it happened two or three times during the rest of that season to the point where it got to him taking two pain pills every day. In his mind, however, he knew it wasn’t right because he would try not to ask the same people to give him the pills.

“You start learning to manipulate the system,” said Favre. “And you become very good at it.”

It eventually got to the point where Favre says he was taking a month’s worth of a prescription over just two days.

He also says that about every four weeks he had to add another pill, going from taking two to taking three to taking four, and so on.

“During the ’95 season I had a seizure the night before a game,” recalled Favre. “An all out seizure.”

He then met with a neurologist who told him that his lack of sleep was short circuiting his system.

However, Favre says “as they dug deeper they found out I had an addiction to pain pills.”

Favre then claimed he would stop taking the pills, but he didn’t, and when he had another seizure in the hospital that offseason when he was having ankle surgery, he says, “That scared me.”

At that point he says he had a “come to Jesus” where he had to admit his problem to his family.

In treatment, Favre says he fought it, which is why it took 75 days instead of 28 for him to be released because the NFL told him, “If you don’t stay, you don’t play.”

Unfortunately, it was just another manipulation by Favre and he hadn’t really broken his addiction and went back to the pain pills.

That year, the Packers, who would with the Super Bowl that season, told Favre that if he needed a pain pill they had one he could take the was non-addictive.

After the season, he says, “I had eight pill in my possession. Eight pills would not do what I wanted it to do. It would give me zero buzz.

“And I was home in Mississippi and I was as low as I possibly could be. Even though I’d won the Super Bowl, won an MVP, actually, won three MVPs in a row.

“During this whole time I hadn’t slept a bit. Like, maybe an hour a night. But I was low. I felt… and I said, it’s one of two things: I die or I flush these pills down the toilet.

“And I contemplated. I sat by the toilet for two hours.

“And eventually I dumped the pills into the toilet. Flushed them. And I almost wanted to kill myself because of doing that. I could not believe that I had actually done that. And I was so mad at myself because now what was I going to do?”

He spent the next two weeks shaking, cold, and sweating, especially around 9 o’clock because that was when he would always take some pills.

At that point Favre says he was clean, but added that it took him a few months for the desire to go away.

Favre also said that he was one of those who said, “I don’t drink every day so I don’t have a problem.”

“How ridiculous is that statement?” asked Favre.

He ended up going back to rehab for alcohol and says he hasn’t taken a drop since 1998.

Listen to the full episode of Bolling With Favre with Dr. Phil here.