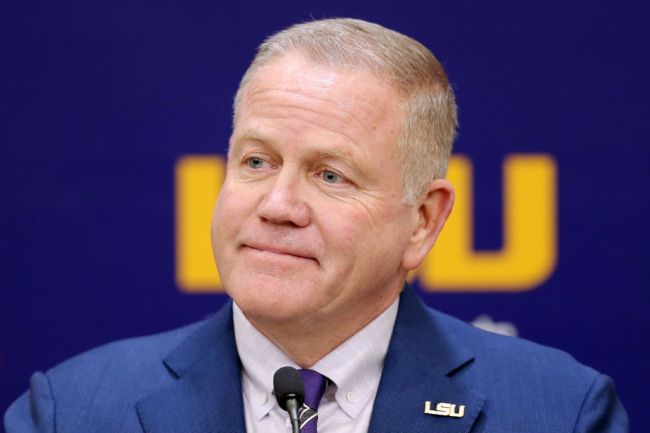 After being hired as the new head football coach at LSU, Brian Kelly is doing everything he can do to fit into his new surroundings in Baton Rouge.

Earlier this week, Desmond Howard questioned whether Kelly was the right fit to recruit in Louisiana because he wasn’t as plugged to the “culture” of the south as his predecessor Ed Orgeron.

“We talk about coaches, the first thing you want to know is, is he a great coach?” “And Brian Kelly’s a fantastic coach. But then you want to know, well, is it a good fit? And I’m not sure I’m sold on that just yet. Obviously both parties got about 95 million reasons to make it work, to figure it out. But when you look at Coach Kelly, he’s pretty much the 180-degree opposite of (Ed Orgeron). I mean, Coach O was a guy who was the perfect fit. He was one of them. He could sit in the living rooms and talk to the recruits and their parents and say, ‘Hey, I’m one of you guys, we can relate. I know the culture.’ You just don’t get that from Coach Kelly.”

With questions about his “fit” surrounding him, Kelly bizarrely busted out a southern accent while speaking to LSU students in public for the first time.

Brian Kelly’s new, fake southern accent is the story of the decade. https://t.co/mh5KaMAxll

Here’s video evidence to prove Kelly’s accent is different from just a week ago.

Fans immediately called out Kelly for his fake southern accent.

Oh hell no.
Don't come down here and start talking like us. Recruits are gonna see through that in a carpet bagging second. At least eat some damn cornbread before trying to pull that off. https://t.co/79ceIT2vWp

Brian Kelly grew up in Chelsea and went to Assumption. Now he's talking like The Waterboy. https://t.co/zmz9V693EB

don't act like you wouldn't fake a southern accent for $95 million https://t.co/UyqNxRDCYc