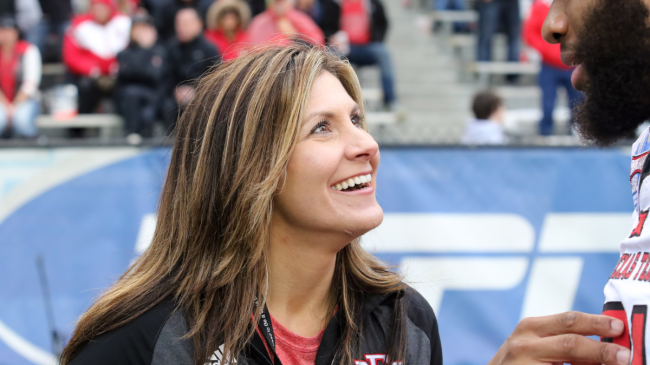 A clip of Brittany Wagner talking about Hugh Freeze’s evaluation of ankles is circulating social media.

Following his hire at Auburn, the reality television personality detailed her experiences in recruiting with the former Ole Miss head coach while she was working for a Mississippi Junior College.

Wagner rose to fame as a member of the Last Chance U Netflix series. She was an academic advisor that took on a motherly role for many of the players on the East Mississippi Community College roster. She became a fan favorite due to her close relationships with the athletes, and also for her insistence that her students always had pencils for class.

Being involved with the players off the field, she was an integral part of the recruiting process when it came to coaches asking about academic progress. Due to that involvement, Wagner got to interact with a number of high-profile leaders on visits.

One of those leaders was Hugh Freeze, who coached down the road at Ole Miss while she was at EMCC. On Wednesday, a video surfaced on social media of her talking about Freeze’s infatuation with players’ ankles.

Apparently, the first requirement for a Hugh Freeze offer is skinny ankles. Take a listen.

“The first thing he does when he meets a player is he asks them to see their ankles… He says that this has never failed him. You can tell how athletic a player is by how skinny their ankles are… If a player has skinny ankles, they’re super athletic.”

Definitely an odd recruiting tactic, but it seemed to work for Freeze at OM as he pulled in a few highly rated classes while in Oxford. Of course, the hookers might’ve had something to do with that, too.

Players hoping to play for Auburn now know what it will take to pique Freeze’s interest.

As for Wagner, she’s turned that pencil persona into a consulting company called 10,000 Pencils which assists at-risk youth with academic and emotional support.