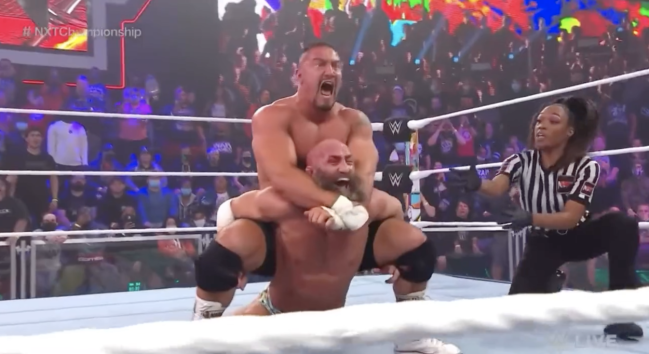 Bronson Rechsteiner, better known as Bron Breakker, became the new WWE NXT Champion on Tuesday night. Less than a year into his professional wrestler career, the son of Rick Steiner and nephew of Scott Steiner carried on his family’s legacy.

At 6-foot-0, 230 pounds (or more), the 24-year-old Rechsteiner is an absolute beast. He looks like you could line him up on the gridiron and have him fail to lose a yard as a ballcarrier.

Well, sure enough, that’s exactly what he did in a former life.

Rechsteiner was born in Georgia and won a state championship in wrestling, but also earned three letters in football. Although he played all over the field, he primarily spent time at wide receiver and as a linebacker on defense.

It was virtually impossible to bring him down when he had the ball, and always laid the lumber.

As a result of his play in high school, Rechsteiner received offers from five schools as a two-star prospect and ultimately committed to Kennesaw State. He played his freshman year on special teams and linebacker before transitioning to offense as a sophomore and junior.

Rechsteiner was a hard-nosed, downhill runner with deceptive speed for his size. He never skipped out on the weight room. The Owls list Rechsteiner as a running back, but he was more of a fullback.

Either way, he is an electric factory.

After college, Rechsteiner signed with the Ravens as an undrafted free agent but was released after training camp. Not long thereafter, he began his professional wrestling career and the rest is history.

Less than 365 days later, he defeated Ciampa by submission to win the NXT Championship. The fullback legacy lives forever.