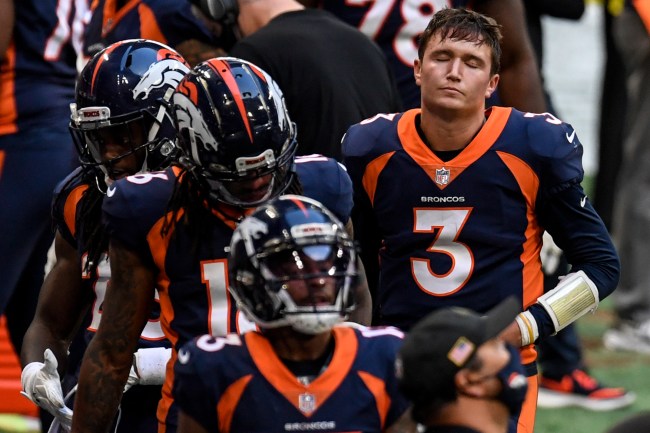 On Saturday afternoon ESPN’s Adam Schefter revealed that the entire Broncos QB unit was ruled out after they were exposed to QB Jeff Driskel, who tested positive for Covid-19.

All the QBs on the Broncos' roster are ineligible to play Sunday against the Saints after being deemed high-risk, close contacts, sources tell ESPN.

None were wearing masks at the time of exposure, per source.

Here's how Denver got wiped out at the QB position in a 72-hour span:

Drew Lock, Brett Rypien and Blake Bortles did not wear masks, per a source, and were deemed high-risk close contacts today. They now are out Sunday.

The NFL is apparently refusing to postpone Sunday’s Broncos-Saints game and the Broncos are going to be forced to play former Wake Forest QB Kendall Hinton.

All three Broncos QBs have been ruled out. One possible QB: Kendall Hinton. He's on Broncos practice squad as WR but he was a three-year starting QB at Wake Forest. (Won't be coach Rob Calabrese. League won't allow, I'm told).

#Broncos WR Kendall Hinton will play plenty at QB tomorrow, source said. 2020! He did play QB for a few years at Wake Forest.

According to NFL insider Benjamin Allbright, Broncos players are angry at the NFL for not postponing the game.

Reached out to several Broncos players who are NOT happy about the situation.

They feel the league moved games for everyone else (including the Pats vs Den) and could easily do so here.

Players are behind Kendall Hinton, but understand reality.

I’m not one to complain, but @NFL y’all can’t possibly send us into a game without a QB. The most important position to a offense. We don’t even got a back up….