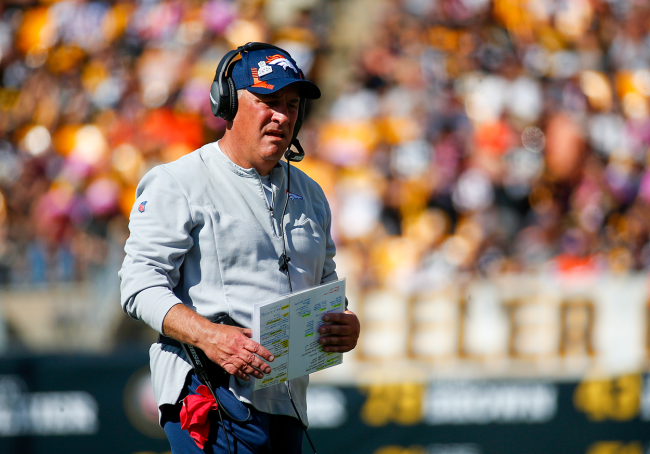 Vic Fangio was fired as head coach of the Denver Broncos following the 2021 regular season after three-straight losing seasons. Fangio, who previously served as the defensive coordinator with six different NFL programs, won 19 games and lost 30.

On Sunday, one of his former players came out and told a very telling story. It did not paint Fangio in a good light.

Su’a Cravens, a former five-star recruit, played three years with the USC Trojans before choosing to forgo his eligibility and enter the NFL Draft. After doing so, Washington selected him in the second round.

The strong safety from California spent two years with the team now known as the Commanders but struggled to stay healthy. He was hindered by injuries and personal issues that kept him off of the field during much of his short career.

After two years in Washington, Cravens was traded to Denver. Not long after arriving in Colorado, he was placed on injury reserve with a meniscus injury.

Prior to the 2019 season, he was released as part of the final roster cuts. Cravens, who was a promising prospect, never got a fair shake in the league because of injuries and other issues.

Now, four years later, he is missing the game. He told a story on Sunday about his time with the team and shared how committed he was to getting back on the field.

I miss Denver so much. Wish I didn’t keep tearing my damn meniscus. I’d get my knee drained once a week just to show I was committed to be on the field. Didn’t help Vic went out his way to dislike me either lol but that’s life. I’m living vicariously through @jsimms1119 now 🤷🏽‍♂️😂

According to the former Bronco, he had the chance to meet with Fangio after he was cut and chose to do so. He says that he waited outside the head coach’s door and that Fangio simply chose not to speak with him, despite his knocking.

Messed up part is when I got cut they asked me if I wanted to meet with Vic. I said yes and waited outside his door. I knocked and waited for 10 mins . He was inside and chose not to meet with me. Imagine if I stormed out and caused a scene. It would’ve made headlines. “Cancer”

In addition, Cravens went on to say that his lack of meeting is just the beginning of the stories he has about Fangio. He also said that, one day, he might share them with the world.

This just the tip of the iceberg lol I got countless stories of Vic that Justin, Bryce, Kareem, basically every DB will tell you are 100% true. If I’m lying I’m dying. I lowkey want to host a podcast episode where I tell these stories with my boy @jsimms1119 as a guest. SHEESH!

Fangio is currently unemployed and out of the league. Taking Cravens at his word, coupled with the losing record, maybe that is for the best.