A Bro’s Guide to Gambling on the Golf Course 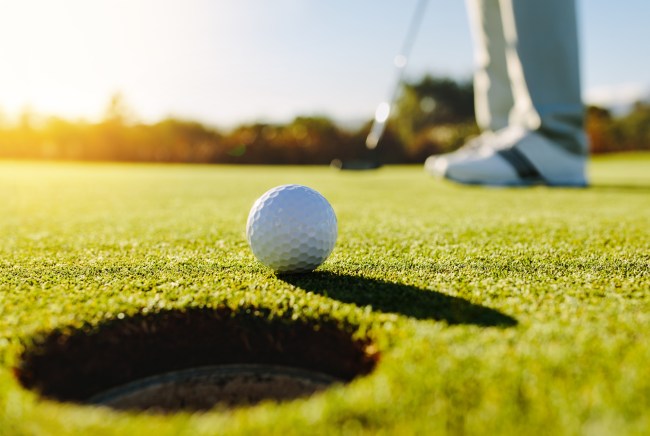 Very few articles I’ve seen have touched on one of the best aspects about playing golf: gambling. I know you can technically gamble on other sports as well, but if you bet your friend $50 on a game of 1-on-1 basketball, chances are it’ll turn into a UFC fight within 10 minutes. Some people argue that golf takes too long and is boring, which is why you should treat golf the same way you treat the random Colorado State-Nevada game on a late Thursday night and throw some money on it — just to give you a reason to care. So here are some of the best gambling games you and your friends can play on a golf course. And if you’re not a gambler, my advice to you is just slug enough beers to make your round tolerable, but not enough to where it leads to a sexual harassment lawsuit from the cart girl. I mean, c’mon bro, I know she’s hot but she’s like 19 tops and you’re a balding 29-year-old with a bulging waistline and a weird sense of humor. Just give her a nice tip and eye-bang her from a distance like a normal person.

I’ll start with the most popular form of golf gambling, the classic 2-vs-2 partner match. Ideally you want to make the teams as even as possible, and if you’re in a group with fairly serious golfers, you’ll all have official handicaps so you know how many strokes each person gets throughout the round. There are several ways you can gamble on a partner match, the most common being best ball, meaning whichever player gets the lowest score on a given hole, that team wins the hole and whatever the hole is worth (usually anywhere from $1-$10 per hole depending on how big of gamblers you are). You can also play combined score, where you add up your total team score against the other team’s total score. The downside to that is that one of the players can sit there hacking the ball six times out of the bunker and completely fuck it up for his partner who birdied the hole. In both match formats, if the hole is tied, the next hole is worth double, or in golf terms, a “carryover” hole. There are other wrinkles you can add to the match, which I’ll get to shortly.

And by shortly I mean now. The reason I list junk separately from the partner match is that sometimes people will only play junk and not a match, but most of the time it’s incorporated within a match on top of winning the holes. Junk basically means you get money for doing cool shit. Here are the most popular forms of junk:

This one is perfect for the casual golfer. You know when you’re waiting on the tee box and the guys in front of you are all playing at that “the last thing in the world I want to do is go home to my wife” pace? You’re going to need something to occupy your time, and pissing in the woods only takes 30-73 seconds depending on how many beers you’ve had. If you’re playing at a decent course, there should be four tee box markers on the tee box, two blue and two white. The object of tee box golf is to hit all four of the markers in order and then your opponent’s ball before they do the same, alternating shots in between. It’s basically like Around the World in basketball, except you never remember being this high on a basketball court.

Snake is very simple and revolves only around putting. If a person 3-putts (or more) on a hole, they are the snake and they owe everyone else in the group $1 (or whatever amount you agree on). That person remains the snake until someone else 3-putts, so if you 3-putt the first hole and nobody else does for the rest of the round, you’re fucked. If two (or three) people 3-putt the same hole, they’re all the snake and the person who didn’t 3-putt gets $1 from everyone else. Snake can rack up quickly if you’re playing for a decent amount, so the best strategy is to not worry about your score and just leave all your approach shots on the fringe to give yourself a free putt without it actually counting as a putt. #SnakeItTilYouMakeIt

Let’s say you’re too drunk to remember how all these fancy games are played, but you also need some side action to accommodate your rum buzz. There’s nothing wrong with the occasional (or frequent), “Bet you $10 I clear the water” to keep things interesting. Pretty soon you and your buddy are eleven beers deep and are betting on who can walk the furthest past the “DANGER QUICKSAND” sign without using a golf club for stability. Classic golf hi jinx.

Just don’t hit any old people. They don’t like it when people do that.