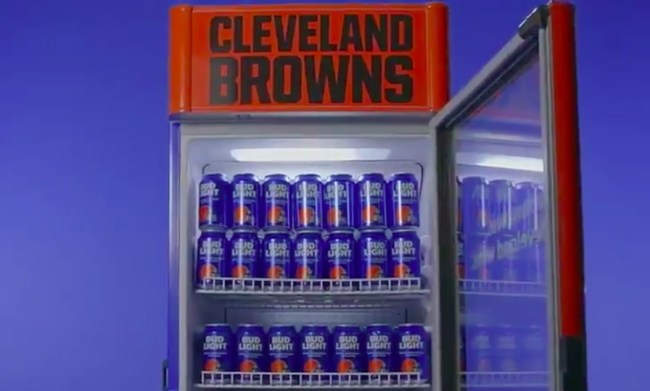 There are a few things in the world that are virtual certainties.

The sun will go up and down. The tides will go in and go out. We’ll all be faced with our own mortality at some point. The Cleveland Browns will be bad at football.

However, a ripple went through the universe last night after the natural order was upended when the Browns managed to top the Jets and won a football game for the first time in 645 days, giving their fans a brief reminder of what happiness feels like in the process.

There were naturally a ton of reactions to the victory, but for people with boots on the ground in Cleveland, there was one particular cause for celebration: the opening of the Bud Light “VIctory Fridges” that dotted the city.

After the game, Bud Light sent out a congratulatory tweet.

Cleveland, the @Browns won. The fridges are open. Go celebrate with a Bud Light. You’ve earned it. pic.twitter.com/RvjJ0WvpyO

I honestly thought there was a chance the beer stocking those fridges would eventually be skunked to oblivion after sitting there for years on end but this is one of those situations where I’m more than happy to admit I was wrong.

Countless videos of last night’s celebration have hit the internet but none of them are more entertaining than Browns fans reacting to the unlocking of the fridges and cheering just as loudly as they did when the team snapped its winless streak.

Baker Mayfield asking if the Bud Light Coolers are open now after Epic Victory for Cleveland.

As you’d expect, crack reporter Darren Rovell was on the case to give us some tremendous content.

He also did his whole “sports business” thing and shed some light on what Bud Light earned from the victory.

$6.87 million: Publicity value for Bud Light from Browns Victory fridges, measured on TV, Radio, Internet & Social from last night until 8am ET this morning, according to @ApexMGAnalytics pic.twitter.com/8Nm3R7hvi9

I’d once again like to congratulate the Browns as well as any fans who didn’t call in sick this morning.