Browns’ Damarious Randall Promises To Buy Jerseys For Fans If Cavs Win The Finals, Could End Up Costing Him Over $15 Million 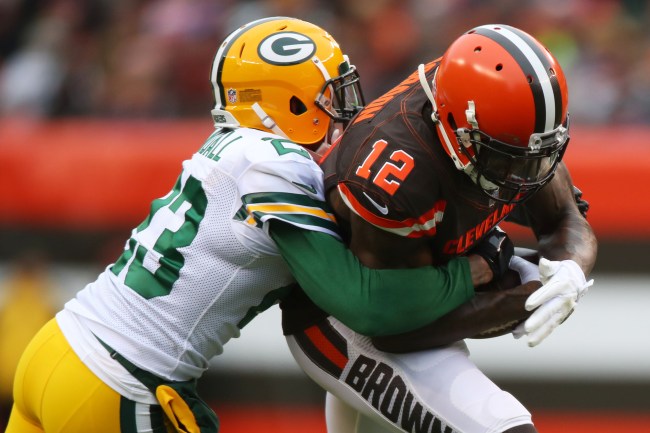 The Cleveland Cavaliers are facing long odds to win the NBA finals and are currently huge underdogs to beat the Golden State Warriors super team.

According to OddsShark, the Warriors’ title odds have moved all the way to -1100 (bet $1,100 to win $100). According to ESPN’s David Payne Purdum, the Cavaliers are the biggest NBA Finals underdogs since at least 2002.

That the Cavaliers are underdogs is a surprise to no one. Golden State beat Cleveland in five games in last year’s Finals, and the Cavs are without Kyrie Irving this time around.

One of the newest members of the Cleveland Browns, Damarious Randall, made a bold promise to fans if the Cavs did indeed end up pulling an upset. Here is Randall promising anyone who retweets his tweet a Cavs jersey if Cleveland does the improbably and wins the NBA finals.

Randall’s tweet currently has 190k retweets and is rising pretty fast. At $75 a pop for a jersey, that amount will easily surpass $15 million dollars worth of promised jerseys if the Cavs win.

Despite the amount, Randall says he will follow through with his promise if the Cavs win.

Go ahead and retweet Randall’s tweet just in case the Cavs win.