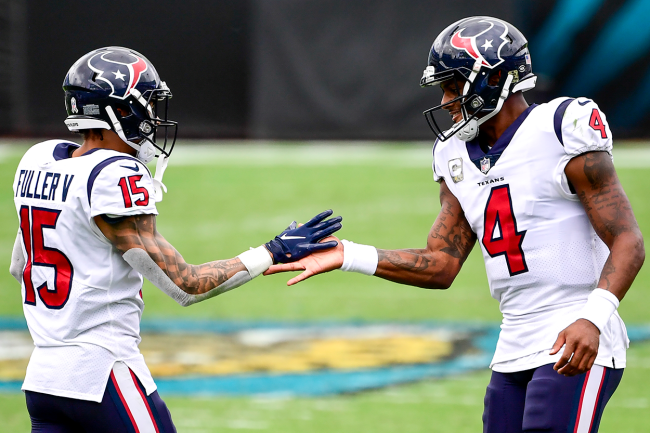 Deshaun Watson has officially been traded to the Cleveland Browns and is set to receive a massive raise upon arrival. Although the 26-year-old finally got his wish and got out of Houston, there are some glaring questions to be answered.

The first and biggest question is whether he will be able to play. Watson currently has 22 civil lawsuits pending against him.

Depending on how things continue to play out with the lawsuits, the NFL could choose to suspend him in 2022. If that is the case, his contract is structured so that his guaranteed money will not take a huge hit.

If Watson is allowed to play this fall, there is also the question of who he will throw the ball to. After Cleveland acquired Amari Cooper from Dallas, the 27-year-old pass-catcher will presumably be his primary target.

While that is a very big weapon in theory, defenses will presumably lock him up with double coverage as often as possible. That leaves a need for secondary targets.

Tight ends Harrison Bryant and David Njoku will surely be in the mix and wide receiver Donovan Peoples-Jones has been rising in recent years. However, the Browns do not have a solidified No. 2 target.

According to a new report, the Cleveland Browns are in the mix for a big-name free agent receiver.

Insider/analyst Jordan Schultz says that there is mutual interest between Will Fuller and Cleveland. The former Texans wide receiver is interest in reuniting with his former quarterback in the Forest City.

There’s mutual interest between FA WR Will Fuller and the #Browns, per sources. Fuller — just 27 years old — hauled in 69 percent of his targets when Deshaun Watson several targeted him as #Texans. Fuller has other suitors as well, but likes the idea of teaming back up with DW.

Fuller is a fantastic deep ball threat when he is healthy and has recorded three seasons where he averaged 15-17 yards per catch. His ability to take the top off of opposing defenses would help any quarterback, but he and Watson have that familiarity that might take it to the next level.

In addition, Schultz reported that former Browns receiver Jarvis Landry is reconsidering his options. Landry previously requested to be let go by Cleveland earlier this month.

Now that Watson will be wearing brown and orange, Landry is rethinking things.

Spoke with several teams who currently have an offer out to Jarvis Landry. I’m also told the moves Cleveland has made in the last 48 hours — namely trading for Deshaun Watson — may have Landry rethink things. #Browns’ return remains on the table for the 5x Pro Bowl receiver.

Landry was reportedly interested in playing with Watson if he went to Atlanta. As were two other notable free agents.

Obviously, Watson is now in Ohio, so playing together for the Falcons is off of the table. However, perhaps, the trio of talent will consider playing with him in Cleveland?