Bruce Arians Discusses Bucs’ Pursuit Of Tom Brady: ‘Can’t Hit A Home Run Unless You Swing For One’ 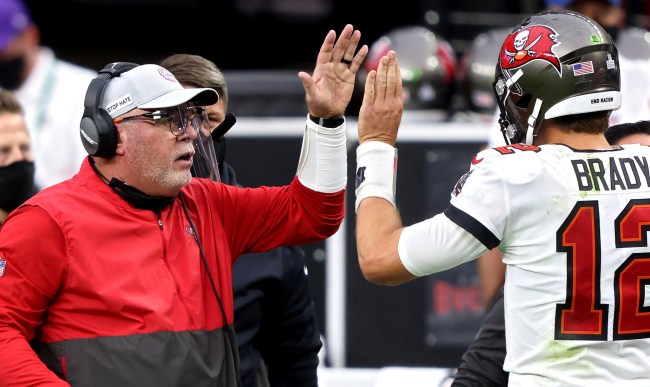 Bruce Arians went 7-9 in his first season as the Buccaneers’ head coach. It wasn’t a good year by any means, but it also wasn’t a terrible one either. Nevertheless, it was clear Tampa Bay needed a change at quarterback and was ready to move on from Jameis Winston. Arians, being the bold head coach he is, decided to swing for the fences and go after the greatest to ever do it, Tom Brady.

That strategy seems to have worked out pretty well with the Bucs set to take on the Chiefs in Super Bowl LV.

Arians spoke with the media on Thursday about the franchise’s mindset going into free agency last year and their pursuit of Brady. While his explanation was simple, it was full of wisdom both from a football and everyday life perspective.

“You can’t hit a home run if you don’t swing for one,” Arians said according Rick Stroud of the Tampa Bay Times. “That’s how you live life. Are you going to sit in a closest and or have some damn fun?”

Tell ’em Bruce, go out there and have some damn fun, people.

The Bucs have certainly had their fair share of fun this past year punching their ticket to the Super Bowl that will be played in their home stadium. Brady threw for 4,633 yards and 40 touchdowns during the regular season marking the first time he’s surpassed 4,600 yards through the air since 2015. His 40 touchdowns are the most he’s recorded since throwing for 50 in 2007.

That swing for the fence mindset may not always work out well, but it did in this case, and there’s no denying it’s been fun to watch all of this unfold in Tampa Bay.