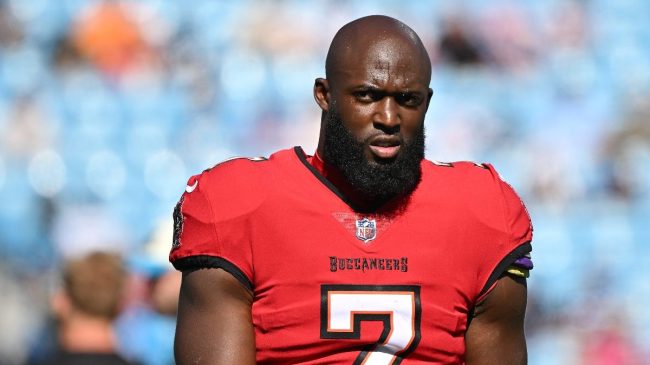 The Tampa Bay Buccaneers pulled off a comeback win against the Los Angeles Rams to remain competitive in the NFC South. However, it sounds like frustration is brewing in the backfield, as Leonard Fournette is reportedly frustrated about his role in that game. Rachaad White did step in at running back, but this team must try something else as they’re dead last in rushing yards in the NFL right now.

According to Rick Stroud, Fournette was not a fan of Rachaad White subbing in late in the first half of the game. Considering the Buccaneers are last in rushing this season, it makes sense why the coaching staff would switch things up. Regardless, Leonard Fournette is not happy about it.

During the middle of the game, sideline reporter Tracy Wolfson broke the news of Leonard Fournette’s frustrations in the middle of the contest. Additionally, she claims that the Buccaneers’ rookie running back Rachaad White consoled Fournette, saying “We need you.”

“We need you.” – Rachaad to Lenny@tracywolfson with an excellent report of Leonard Fournette getting words of support from Rachaad White 🤝

We’ll see if this turns into a growing issue or not. What makes the situation even worse is that head coach Todd Bowles claimed he, “didn’t see or hear anything about that,” per Rick Stroud.

Considering Tampa Bay is dead last in rushing yards, switching things up is probably the right move. Additionally, White was a bit more successful than Fournette was on Sunday. Perhaps we’ll see a change in who will be playing running back for the Buccaneers moving forward. Especially if Rachaad White continues to outperform his veteran teammate.