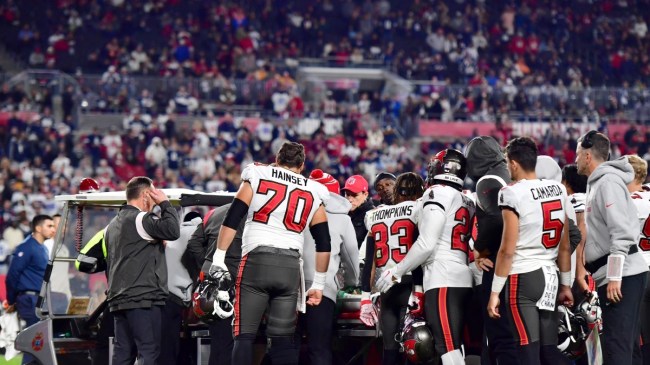 Just two Mondays ago, Buffalo Bills defensive back Damar Hamlin suffered an injury that was as scary as any in sports history. The Pitt product laid on the field, motionless, for almost an hour, and people feared the worst.

Thankfully, Hamlin is seemingly going to be okay. Thanks to the quick work of the training staff of the Buffalo Bills and Cincinnati Bengals and the excellent work of the practitioners at the University of Cincinnati Medical Center, Hamlin is resting at home in Buffalo as he continues his recovery.

But, it sent shockwaves through the sports world. The injury was to his heart, which allegedly caused a reaction that made it stop beating. He had to be resuscitated on the field and at the hospital, according to reports.

Naturally, everyone is concerned about serious injuries in the NFL right now, and in last night’s Wild Card Round matchup between the Cowboys and the Bucs, there was another serious injury that led to a player getting carted off. This time, it was Russell Gage.

Late in the fourth quarter of the Cowboys blowout win over Tampa Bay, Gage was targeted by Tom Brady. He was hit by what looked to be a benign hit. But, he was very much hurt.

Here is the injury to #Bucs Russell Gage. Praying that he is ok🙏🙏🙏
Prayers for Russell Gage. My heart sinks into my stomach every time a player is seriously injury…

Here are some more angles, if you are inclined.

The Russell Gage play from my POV. These guys put it all on the line every single play. Hoping for a full recovery. Posting after update that he has movement in fingers and conscious. pic.twitter.com/iX9JgXwsC1

Gage would have to be stretchered off and taken to a local hospital. After the game, Buccaneers head coach Todd Bowles provided an update on his wide receiver.

Bucs coach Todd Bowles said Russell Gage has been taken to a local hospital. He has s concussion and is being evaluated for a neck injury. Bowles said he did see him moving his fingers on the field.

Prayers up for his health and recovery from this scary injury.