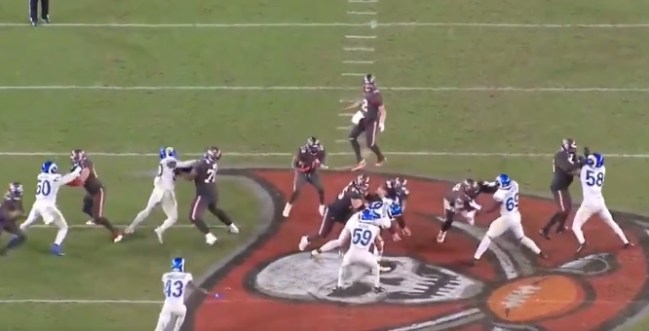 Tampa Bay Buccaneers running back Leonard Fournette hasn’t seen much action for the team this season. Fournette has been fighting for carries with Ronald Jones II each week and it’s not going well for him as he’s losing that battle against RoJo, who has established himself as the team’s go-to running back.

Fournette isn’t helping himself when he’s seen on video missing big holes and running into traffic.

The Bucs running back was immediately mocked for his lack of vision and was compared to former Raiders running back Trent Richardson who committed a similar mistake during a game.

Not the Trent Richardson https://t.co/g0Qcpvcz05

This is so brutally bad!

RoJo needs to be on the field at all times. Stop putting in Fournette, it is so bad. https://t.co/UKKxgGIhhg

Ran straight into his lineman 💀💀 https://t.co/2jbpSuK7vC

He said there’s a hole I’ll go the other way 😂😂 https://t.co/zGmqO9FhjO