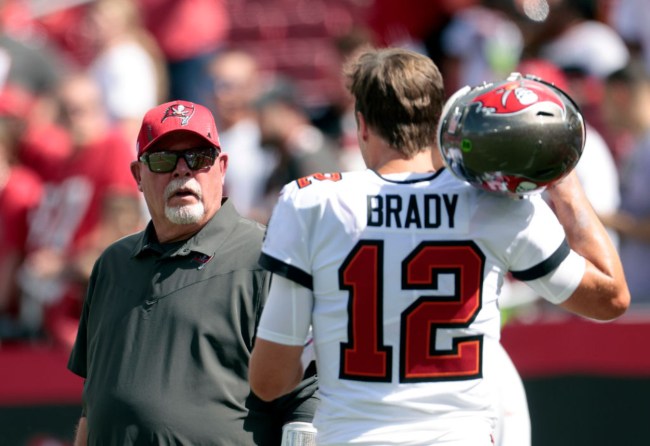 Not long after Tom Brady decided to ‘retire’ for a few hours this offseason, rumors and reports started swirling about some beef between himself and Tampa Bay head coach Bruce Arians.

“Heard some interesting things recently,” Ohrenberger wrote on Twitter, “the Tom Brady & Bruce Arians honeymoon was over in Tampa.”

“The retirement announcement wasn’t because of the trouble seeing eye to eye on the offensive gameplan, but the relationship was souring.”

“Apparently, while Arians was rehabbing the achilles in early mornings, offensive coordinator Byron Leftwich and Brady would work on the week’s game plan. Arians would later come in and take the red pen to work they’d done. The QB and OC felt undermined, there was tension.”

With Brady now back with the Bucs and Arians still being the head coach of the team, Tampa Bay GM Jason Licht was asked about the rumored friction between the two.

Licht didn’t get specific, but did hint that there being some tension there, which in his opinion is normal.

“There’s always gonna be some friction between people on a staff and players and a coach, it’s just normal,” said Licht.

I asked Jason Licht if the key to managing any possible friction between players and coaches is keeping an open line of communication (which Bruce Arians has always tried to do). "Absolutely," Licht said. "[Brady's] loved his time here and he's told me that several times."

Licht certainly didn’t say anything wrong in his answer.

Just like any workplace, especially one where you spend a lot of time with one another, there’s going to be some clashing of the minds.

Brady does things his way, Arians may do things another, while other staff members offer up input as well. No friction in that sort of scenario would be a red flag, honestly.