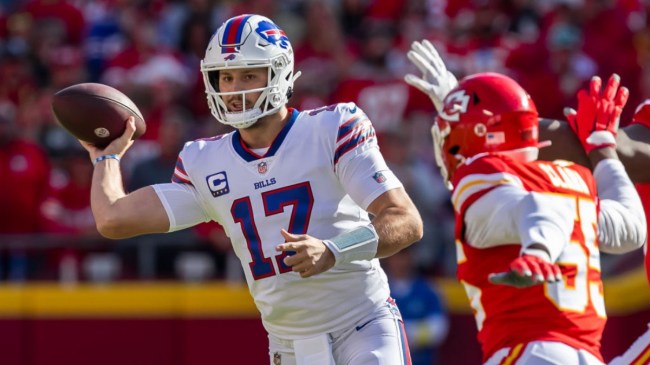 It seems football fans are finally getting a clear answer to this week’s biggest question.

Throughout the week fans have been wondering whether or not Josh Allen would be able to play against the Minnesota Vikings.

Allen displayed some discomfort in his throwing arm at the end of the Bills’ loss to the Jets and it was revealed that he was dealing with a UCL injury in his elbow. He missed practice on Wednesday and Thursday, causing some concern he would miss the game.

On Friday, the Bills revealed that they were considering him “hour to hour” with the injury and he then proceeded to run away from the media at practice.

Luckily, he was able to get in a limited session at that practice, giving hope that he would play in Week 10, but it was still far from a sure thing.

Today, the Bills made a move that seemed to indicate they believe he’ll be ready for the game. The Bills decided not to elevate 3rd string quarterback Matt Barkley from the practice squad for the game.

The #Bills are not elevating QB Matt Barkley from the practice squad, source said, leaving the team with two on the roster.

A sign QB Josh Allen is set to start. He is listed as questionable with an elbow sprain.

With this decision, the Buffalo Bills will only have Case Keenum available to backup Allen in case he ends up not being able to play or the injury flares up during the game.

Hopefully he’s able to make it through Sunday without any issue so fans can enjoy a battle between2 of the league’s best teams with both teams’ key players all available.